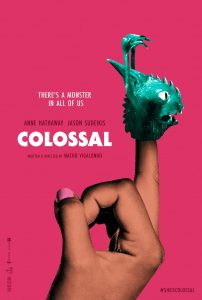 Colossal is a movie that is very easy to spoil, so I’m going to be careful for a little while here, and it’s going to be tricky because most of the things I want to talk about fall squarely into that territory. So first, a brief plot summation.

Anne Hathaway gets drunk a lot, so her boyfriend kicks her out of New York City, and she has to move back to her parents’ home (they’re dead already and the house was just left empty I guess?) and figure out how to be a person again, or else get a job at a bar and continue her life-destroying alcoholism. Meanwhile, a giant monster is stomping around Seoul, destroying infrastructure and killing people. These facts are completely unrelated, OR ARE THEY?

I nearly and mostly liked it, despite my complaints below the cut, for which this is your warning that spoilers are forthcoming. I think the more I think about it, the more the scales will tip from the “nearly” side to the “mostly” side.

The very first thing that I find insupportable is that the movie posters and imdb description consider this a comedy. It so so isn’t. It is occasionally funny, in a way a lot of movies that are not of the comedy genre are, but it is zero percent a comedy. The further along it goes (and it honestly didn’t take very long at all), the less retroactively funny even previous scenes become.

Because it’s nearly a movie about the ways that self-destructive behavior are inevitably externally destructive as well, but right as that point is solidifying into the act two redemptive character arc, it segues into a movie about abusive relationships, in a way that unfairly lets Anne Hathaway off the hook for what she has already done. Yet, the abusive relationships movie is undercut by a failure to fully acknowledge that her original relationship was every bit as malfunctioning as the one the movie thrust her into. In the end, I was entertained but disappointed, because a perfectly fine movie could have been an instant classic of required viewing, if only it had aimed in either specific direction all along.