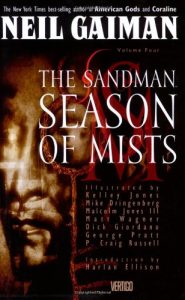 The Sandman, I said. And I meant it, because that is some damn fine literature. I read the series in 1996 or so, right after they’d all been published as graphic novels, and it was a hell of a ride. Observant visitors may notice the domain name, and wonder if it is a coincidence. (It is not. That’d be pretty funny if it were, though.)

What I didn’t ever do was own them. So, over the past few years I’ve been snagging them one at a time as the mood strikes me, and then reading them gradually at whim, not really part of a reading list schedule. The first few books are highly episodic in nature, with introductions to characters and the setting taking up a lot more space than ongoing storylines (although there’s no question that there are a couple of very solid ones). The upshot of this is that I haven’t felt compelled to review any of them yet. But over the past week, I read Season of Mists and it all fell into place. To the point where if I had income, I’d just buy the rest of them right now and take some time. But I do not, so enough about that!

I’m loathe to summarize it, in that I feel I can only damage the pristine beauty, but here goes: The Lord of Dreams attends a meeting with the other members of his Endless family at which he is goaded into righting a long-ago committed wrong, and in the process he receives a most unwelcome gift.

Having read the series before, I can also say that this is where most of the seeds are planted for remaining arc of the story, which could explain my hankering for the remaining volumes just now. The standard high quality of art rounds off the experience, which should be shared by everyone. (Incidentally: I’m caught up now. Yay!) 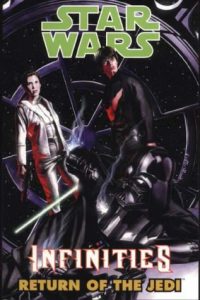 I know it seems like I should be a long way behind, but I’m not. No movies in an Age, one of my books vanished (and has since been replaced, but I’m in the middle of another book right now, which is huge and comfort material, because I wanted to turn my brain off for a bit), I’ve been playing Final Fantasy (and sure, doing well, but the end is days off yet at the minimum). However, I have read several comics lately, and I think I’m willing to review them. So, there’s that.

I was out looking for issues of Serenity, and I came across a 4-part Dark Horse offering, Return of the Jedi: Infinities. A minor change during one of the Jabba’s Palace scenes launches an alternate history of Episode VI. I like Star Wars, and I like alternate history, so I went for it.

Here’s the thing: it’s got flashes of unique vision, although a lot of the story seems to involve moving the chess pieces around such that the characters wind up in essentially identical situations, only slightly more bleak about it, for maximum angst. Which isn’t that bad in itself, except that the closing scene of the story is complete cheese, both on paper and in the execution. I didn’t buy it a bit, put the thing down in disgust, and may have been scarred for life if only I wasn’t aware of the awesomeness of other comics that are available these days. (Such as that Serenity I mentioned, once the third issue comes out and I finish the story. Or Sandman.) 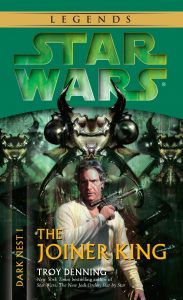 Apparently, there are new Star Wars books set later in the continuity than the New Jedi Order stuff (which has ended, so that partially explains that.) I read it between two weeks and a month ago. I wonder, therefore, if I can remember the title. …and, as it happens, I did so while explaining myself just now. It’s the Dark Nest trilogy, with this particular first book being called The Joiner King.

Even after over a decade of books detailing the rise of the new generation of characters, I’m still only minimally attached to them. It didn’t help my enjoyment of the book that a lot of what happened revolved around pheromones changing peoples’ brain chemistries such that they act in new and unexpected ways. I’m not going to come out and call it a sloppy plot device until I see how it plays out over the next couple of books, because, right, trilogy. Nevertheless, it tainted an otherwise fairly decent story. Standard adventury goodness, some rehashing of the Jedi trying to find their way in a changed galaxy and the government trying to find its way in a new galaxy, but those parts worked despite being rehashed, because the galaxy is more fundamentally changed than it was even after the fall of the Empire.

My favorite part was incidental so far, involving Luke’s discovery of some old recordings of his father and mother in Artoo’s memory banks that the droid keeps trying to prevent him from seeing, for reasons unknown. Because, like I started to say before, I’m mostly still interested in the original characters, 10 years on or not.

In sum: Interesting main plot conceit. Tantalizing side story. Character Template Modifications of Weirdness +2. Decent new characters. (An Ewok with a death mark on his head in multiple systems; cheesy, but it makes me giggle.) It’s not bad Star Wars, but I’d claim that most bad Star Wars has been stamped out these days. Not brilliant Star Wars, either. If you were already going to read it anyway, still do; if you weren’t, I’m not here to change your mind. 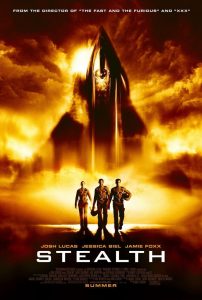 Stealth, aka I Saw It So You Don’t Have To. Only, it had things going for it. The obvious ones are lots of explodey action sequences, and that’s virtually always enough to keep me entertained. I will say that I kinda thought Jamie Foxx was at a point in his career where he could do better than this, though.

But, I was talking about things going for it. Some eye candy, and the explosions, a shadowy government conspiracy, Russian MIGs, and a wise-cracking AI that is just waiting for a chance to go rogue. So, all that, sure. Plus, the script was written by someone with ADD. I’m serious about that. Basically, if at any point you find that you’re bored of the plot, then have no fear; it changes directions completely with every single reel change.

I know it sounds like I’m down on it, and I want to be, but I can’t quite manage to be. At the end of the day, it was a workmanlike, by-the-numbers action flick, and those are worthwhile. It had nothing as bad as the romance scenes in Armageddon or the pet scenes in Independence Day. And when you think about it, Top Gun is really only as good as it is in our memories because we haven’t watched it lately. (Trust me on this one; it’s not worth it.) There’s nothing about doing a job search via the internet that really sucks up a lot of your time, assuming you have a pre-made résumé just waiting to go. And I do. Which leaves me with no good excuse for going most of a week with two more movies under my belt, and yet, here I am. If I hadn’t conveniently lost my out of print Brust novel, I’d be a book behind by now, too.

In any case, the J-horror invasion continues, this time menacing Jennifer Connelly with some Dark Water, which is worse than it sounds because, seriously, said water looked very, very gross. As usual, the dread builds up pretty well over time, and also as usual, the Eastern plotting style never quite gels with my Western expectations. There’s a whole plot wrapped up around Jennifer having issues with being late, dating to her childhood, and then halfway through the movie, it’s dropped completely. More damning, though, is that she didn’t spend half as much time soaked as I was expecting from the title and previews. So much for my predictions about ‘the role she was born to play’. Don’t despair, though. Tim Roth’s lawyer is worth the price of admission, if perhaps not the amount of time it takes to get him on the screen. (Note: he doesn’t spend any time soaked, so that’s not why.)

I’m starting to wonder what the deal is with the Japanese psyche that so much of its fear elements are wrapped up in motherhood issues. Not every single movie I’ve seen in this particular horror genre hits the topic, but it’s holding steady at 75 percent. I bet there’s a paper in this that I would be forced to write if I were in film school, and I’d pass because of how it’s a foreign film thing, even though otherwise I’d fail because it’s horror and that’s not real film-making. Or perhaps I’m unnecessarily bitter.