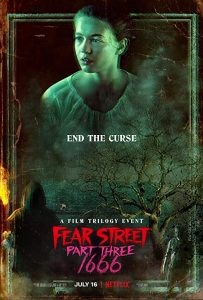 A movie trilogy if 15 days. What a concept! …although truth be told, if it were something I cared more about, I’m pretty sure I’d want it to be slower than this? I hate using things up this fast, perhaps.

The good news is, 1666 was the best of them, at least from a trilogy perspective. (1978 will remain my favorite as standalone.) Usually the end of a series is a little bit of a let down, because you know what’s going on and are just looking for the beats to get hit at the right moments, in the right ways, and they almost never are exactly what you think they should be, even though you have the broad strokes correct. But in this case, I really didn’t know what was coming, and the plot points came together in a way that made perfect sense and retroactively corrected perceived flaws in the prior entries.

As a standalone, it was… fine? The 1666 part of the movie was good, but not quite what I wanted, possibly because the 17th Century horror genre is not really broadly explored enough to warrant an homage, as such. Or maybe it was written a little too modernly? Either way, it was excellent at telling a compelling origin story and fixing a lot of minor problems I had been having with the series as a whole, like I said. And the “let’s resolve the original issue” part of the movie was maybe a little too easy and maybe a little too silly, but it was both of these in exactly the right ways, especially the all too brief Battle Royale scene.

Will not rewatch or actively recommend, will watch future sequels in the unlikely event that they exist.