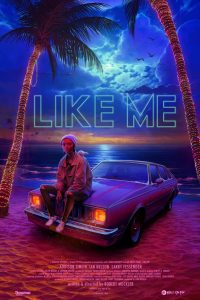 When I read the description of Like Me on Shudder, what I imagined was a chick in a spree murder movie, and spoiler, that is not what it actually is.

Instead, it is at times a psychedelic romp[1], at times a buddy road trip movie, at times[2] a meditation on social media fame and infamy, at times almost a comedy, and at times shockingly violent[3].

I think I’m glad to have seen it, but I’m simultaneously not convinced it is worth the effort for anyone else to.

[1] As movie reviewers like to say so that they can be quoted on posters and DVD covers
[2] And unfortunately the most boring times, since you can tell by the title that this was the point they were driving at
[3] This makes no sense. It’s nominally a horror movie! But something about the YouTube lens of the thing made the actual violent moments feel a lot more real than I’m used to when just watching a movie or TV in general, much less a horror movie in specific.