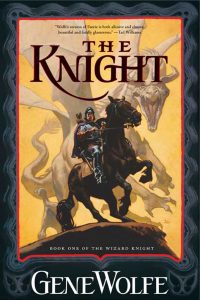 Hard to believe, but true: I actually haven’t done anything in the past month or so. Well, okay, completely untrue. I’ve done lots of stuff in the past month or so. But they’ve all involved being at work a lot or hanging around the house catching up on my TV watching (alas, not reviewed here; but you should be watching Veronica Mars) while my house guy makes various improvements or moving stuff from my storage unit to my house and unpacking and sorting and cleaning and the like. What I haven’t done is play more than about 10 hours of video game total, or watch any movies, or finish more than one book.

Luckily, I did finish that one book, earlier in the week, and that means I get to be here and talk about it. A long time ago, we used… no, that’s wrong. A long time ago, I was in a book club in San Jose. It met for (I want to say) two books. But one of them was the first part of a Gene Wolfe series, the Book of the New Sun. And although I can remember few or none of the plot elements at this particular moment, I distinctly remember liking the main character, the setting, and the prose. A lot. So I’ve had this low-grade interest in Wolfe ever since. And now, I have finally exercised that by reading the first of his most recent pair of books, The Knight.

In what is apparently a common theme of Wolfe’s writing, the eponymous knight is a first-person narrator of dubious reliability. Despite his size, strength, and apparent wisdom, he is in reality a young boy (no older than teenaged) who wandered off unsupervised one day, Alice-style, and found himself in a fantastical (and apparently multi-dimensional) medieval world; and who, a short time later, found himself grown to adult size via enchantment. So, like any boy probably would, Able determines to become a knight and seek adventure and the favor of a lady.

And now, an undetermined period of time later, he appears to have found a way to communicate with his older brother back in America. The story is entirely his very long letter to that brother. Unfortunately, Able still has the mind of a child. He presents information haphazardly and out of order, often whenever it occurs to him without respect for the narrative flow. What he finds important is not always what the reader would, and he puts his trust and faith misguidedly at times. The result is a mish-mash of fact and speculation and almost certainly outright fiction, too. (I mean, internally fiction.)

I say all this like it bothers me. It really did not, though. Sure, it’s a little bit harder to read and work out exactly what’s going on, but I’ve always gotten something out of puzzling out events and peoples’ motivations and so on. It’s like history; it can’t always be clean and orderly and straightforward, because history (and books) are populated by humans who are flawed, wicked, stupid, and often many of these at once. Unlike history, it’s also rife with metaphor, allusion, and dreamlike fairy tale prose. I can dig it.