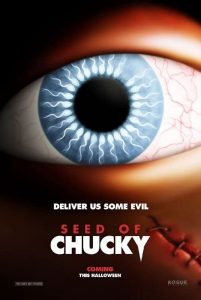 This happens to me all the time. I’ll go to a theater, get in right on time or a smidge early, and the place is empty. Then, before the end of the previews, or even a few minutes into the movie, a handful of other people show up and my dreams of having the place empty are crushed. Who are these people with no interest in previews? And especially, who are these people who don’t mind missing some of the movie? I mean, if it was a kid movie and they’re bringing the five year-old and the infant, okay, no big. It’s hard to run on time under circumstances like that. But for quality slasher horror, I just can’t imagine the excuse. Unless you’re bringing the five year-old and the infant. Obviously, that would be different.

Speaking of confused kids with terrible parents, I got out to see Seed of Chucky tonight. Which is nice, because now there are only four movies I need to see but haven’t yet. Five if you count Alexander, which I of course do not, because nobody who’s seen the preview for that could possibly believe it will be any good. Stupid Oliver Stone. Ahem. Back on track, then.

So, Seed of Chucky is the story of Glenn, voiced by Billy Boyd, as he and his family (composed of a pair of serial killers who died and later demonically possessed a pair of Cabbage Patch looking toy dolls) try to find their place in the world. They must face down such challenges as finding new bodies to inhabit, cutting back on that nasty murder addiction, and artificially inseminating Jennifer Tilly. I think we’ve all been there. Haven’t we, Gina Gershon?

And, in the case of Billy Boyd, the challenge of finding a new agent. Don’t get me wrong, I loved this movie. It had multiple beheadings, spurting arteries, boobies (both real and plastic, and not in the way you think I mean), lots of good pop-culture jokes, and a brilliant casting couch line, “What do I have to do to get you to see me as a virgin?” So, what has Billy to complain about? Quite simply, that while his summer job was voicework for a sexually confused and genetically psychotic (if very Burtonesque) doll, fellow hobbit Dominic Monaghan has landed a plum role as Driveshaft’s bass guitarist on ABC’s brilliant Lost. What’s a Scotsman to do? 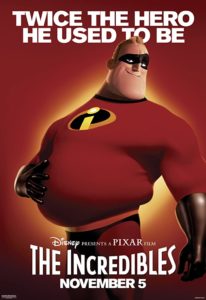 So, yeah, I liked it. Pretty common opinion, so far as I can tell. The thing is, I didn’t love it, which seems to be much less common. Pretty good superhero story. You can’t just have the hero go out and save the world anymore, there has to be depth, because we’re all so damn jaded. Most movies create depth by exploring the psyche of the hero as he (or she) goes out and saves the world. Pixar had the idea of creating depth by making the superheroes unpopular. They cause too much damage while apprehending supervillains, sprain the ankles of people they’ve just saved from certain death, that kind of thing, and so are driven out by a litigious society. They promptly escaped from a maximum security stockade to the Los Angeles underground. Today, still wanted by the government, they survive as soldiers of fortune. If you have a problem, if no one else can help, and if you can find them… no, wait, that’s someone else.

Anyway, fifteen years later, the few superheroes that have kept in contact (including the family after which the movie is named) are going about their average lives, but still wishing they could use their powers to keep people safe. And then, opportunity rises in the form of a request to save a government facility from a robot that has broken its programming and gone on a rampage. How is a superhero to resist the chance to save people and rake in the dough?

Oh, and then something goes wrong, and, voila, instant plot.

So, yeah. Fun kid’s movie, but I wouldn’t really say it had a whole special section for adults, like is always claimed these days. If a kid’s movie is okay by you, though, this is certainly above the dross. There was a brilliant microsecond reference to World Domination: The Drinking Game[1], though. And a job for Jason Lee, who should pretty much always be working, if you ask me.

[1] Note: May not actually exist. But it ought to. At about the same time I was playing Wario World, I also tried out Starfox Adventures. It got a whole lot more play. Then, I got distracted by all the life stuff going on, and then Grand Theft Auto: San Andreas came out. This was a good game, and all, but you just can’t compete with that. I mean, yes, Metroid Prime 2 probably could, but that’s why I haven’t bought it yet. And Half Life 2 probably *will*, if I can ever get my desktop back into working trim.

Anyway, none of that is big on the relevance. The latest Starfox is a weird hybrid thingummy, in that it’s about 65% platformer, 20% RPG, and 15% space shooter. There’s this planet full of dinosaurs, and stompy old T-Rex has taken over, just as you’d expect. With no Utahraptor to hold him in check, it’s up to some blue-furred chick and later our hero, Fox McCloud, to step in and save all the peace-loving Dromiceiomimi, Triceratopses, Woolly Mammoths, and other reptilian species from having all the minerals in their planet exploited.

Like you’d expect, you gradually gather money to buy maps and more sophisticated items, plus bomb plants, magical staff power-ups, vine seeds, and lots of other types of items I haven’t gotten around to yet. Basically a cheap knockoff of Zelda or Banjo Kazooie, but if you have lots of time to play that kind of game, it’s not so cheap a knockoff as to make it pointless. Also, though it shames me to utter such a furry thought, the blue-skinned chick was kinda hot. So, part of the problem with reviewing video games is that my system requires me to be finished consuming the item in question. Having quit definitely counts, but it’s harder to tell when I won’t really be playing a game anymore, as opposed to if I get sick of a movie or a book.

Sadly, this excuse will fit a lot better on the following review, because I knew I didn’t like Wario World within the first fifteen minutes. I was playing it back in mid-October, at my parents’ house. I expected it to be pretty good, what with finding Wario to be a fairly amusing character in the Mario Bros./Donkey Kong Nintendoverse, and especially due to the brilliant WarioWare, released at the same time for the Gameboy. Alas, sheer lameness lay ahead.

I got off to a great start by not realizing that the initial area was mostly just the menu of places to go, not actually part of the real game. So, poor introduction, check. Then, after I finally did work out where to go to play the game, it turned out not to be 3D after all. I mean, I like sidescrollers just fine, but it’s not what I saw coming here. (Technically, there are three dimensions, but while right/left and up/down are fully articulated, forward/backward is about ten feet wide.)

And the gameplay itself just really wasn’t much of a much. The puzzles were somewhat interesting, but I found one of them to be unsolvable during the first world, and the first world is supposed to be about getting up to speed, not about not being able to do stuff. I bought it used, so no instruction book. This could indicate that some special move I wasn’t aware of could have helped me, but frankly, that’s still bad design. Games these days are supposed to tell you how to use the buttons as you go, because there are too damned many of them to learn all at the start.

The long and short of it is that the problems I encountered were mostly due to missing info and poorly managed expectations. Still, though, most games I expected to like going in would hold my interest long enough to get through the rough patches, or at least make me want to explore online for whatever info I needed to be able to play. This one did not, and when googling isn’t worth the effort, that’s just a flat-out failure. 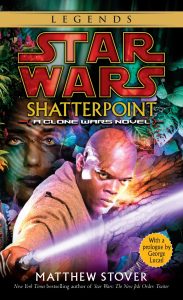 I’ve had lots of real books lately, but being as this was an airport weekend, I snagged a Star Wars book I bought on a whim at Hastings a few weeks ago. I haven’t read any of these since the New Jedi Order series concluded early in the year, I don’t guess.

Anyhow, this one is set in the Clone Wars, several months after the battle of Geonosis. It’s all about Mace Windu (Samuel L. Jackson, for you casual fans, of which there surely must be very few these days) on a quest to find out why his fellow Jedi Council member and former Padawan has apparently gone rogue and is committing atrocities.

The actual plot of Shatterpoint is irrelevant. Honest. There are lightsabers, fights against overwhelming odds, bad feelings, and pretty much everything else that has the Star Wars stamp on it. The main purpose the book serves is to give you yet another window on what being a Jedi was, back in the Republic, and why the Clone Wars were ultimately their demise as a society. Which is to say, rabid fans will eat it up, and casual fans won’t care enough to get past the label.

Also, of course, it serves the ever-widening purpose of making fans rabid and casual alike resent George Lucas for being among the least capable writers in the Star Wars universe. I shouldn’t need a book to tell me in an oblique hint exactly why Palpatine’s plan was essentially unstoppable from start to finish, even while Lucas’ cinematic attempts leave me largely grasping at straws. 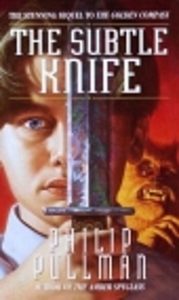 Back in May, I got up to Recycled Books Records and CDs in Denton with some friends, for extended shopping. Among the things I found was a pretty matched sat of Philip Pullman’s His Dark Materials trilogy, young adult fiction that I’ve been hearing was necessary reading for the past two or three years. So, snagged it, and like most things lately, read the first one before I had a log. Last week and into the airplane last weekend, I read the second book of the trilogy, The Subtle Knife.

Below the cut are spoilers for the series so far. I deem them to be acceptable, but read at your own risk.
END_OF_DOCUMENT_TOKEN_TO_BE_REPLACED