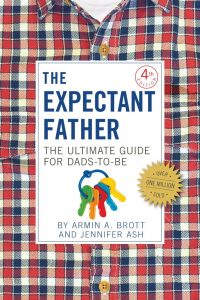 A number of months ago, I had read half(-ish) of a book, and reviewed it, in part because reading a book for nine plus months makes it hard to review the whole thing after that long, and in part by way of announcement. This review is not by way of any additional announcement; I have simply finished The Expectant Father.

For the most part, my initial review stands. There’s a lot of good information here, some questionable information, and a few things that are maybe bad. The authors source a great deal of their information, and cross-reference back and forth within the book as well. But every once in a while, Armin Brott’s anecdotal style goes off the rails when he makes a point of generalizing that anything he happened to do to make his wife unhappy during once of her pregnancies into ironclad advice for all fathers about all mothers everywhere.

This is a minor complaint in a sea of good, mostly because it doesn’t happen super often. Less than once per chapter? Like I said last time: I don’t know how much of what I learned was directly applicable, or even correct, but the sense of security and confidence was meaningful either way. Of course, now my streak of reading every chapter just in time is broken, since I’ve read not only the labor and delivery (and emergency c-section if needed) chapters, but the “now you have a human in front of you” closing chapter, but none of these things have occurred.

Still, though: if you find yourself in the position of being a first time father, or at least first time partner to a pregnant woman even if you’re a father previously through some series of events, I can recommend this book with few to no reservations. Not that this is exactly controversial, what with its best-seller, multiple editions status. 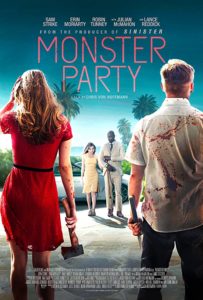 Monster Party is a pretty weird movie. Like, it starts off as a crime drama that suddenly takes a left turn into horror at about the halfway point. (And even knowing that it would, the turn is shocking in its suddenness.) But all of that would be fine and I could just call it riffing on the same themes as Ready or Not[1], just with a different set up.

Except that every aspect of the movie is just deeply nihilistic and dark. Going into why would be way more spoiler-laden than the already inevitable spoilers I have provided, but in retrospect, geeze. Recommended for people who like their movies like they like their coffee: blacker than the blackest depths of their empty souls.

[1] Which I briefly mistook for Hide and Seek, a movie about which I had completely forgotten and even now remember almost nothing, but which via downstream links on my review have lead me down a rabbit hole of old creepy internet stories for the past half hour, and selected my next movie for me. 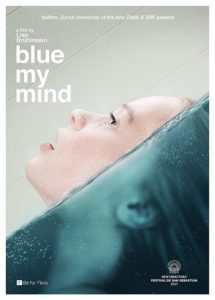 Another week or so, another movie or so.

This time, a not-particularly-horror movie that combines teen angst bullshit[1] with a modicum of weird body horror, which for the most part seemed out of place, to be honest? 15 year old Mia is going through puberty, which means she doesn’t like her parents, does like the mean girl clique at school, and wants to have all the sex and drugs and cigarettes it is possible for a nearly-legal German teen to have.

But also, strange things are afoot with, uh, her feet. And the family goldfish. What can it all mean? Was she adopted like she thinks, or did she just fall in with the wrong crowd, like her parents think? Does the body horror have any place in this movie? I can answer that one: no, but it did give them a way to wrap things up, instead of just trailing off into disaffected adulthood like most people making “bad” choices end up in fiction. So… yay?

I’m carefully avoiding the spoiler at the center of Blue My Mind, mostly because it was impossible to not know it from the presentation on my streaming service of choice, and the expectation that it would turn out to matter is mostly what ruined the movie for me. Counterpoint: I probably wouldn’t have watched it without that expectation. Counter counterpoint: would that have been so bad? 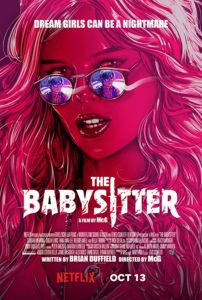 So, good news, Netflix has done right by me after Shudder let me down. Okay, playing that back in my head, it doesn’t actually sound like good news. I guess I’m just saying I’m glad that there are decent horror movies outside of Shudder, is all. Although if I’m getting my money’s worth out of them, why should I really care? Plausibly of much more import, why should you care, prospective blog reader?

Starting again, then: The movie I watched today was The Babysitter, in which a twelve year-old boy[1] is babysat by a hot teenage neighbor girl with whom he has a pre-existing friendship, one would presume from prior babysitting endeavors, while his parents go out of town for the weekend[2]. Later, after being egged on by a school friend, he resolves to stay up past his bedtime and see what the babysitter really gets up to at night, instead of being tired and going to sleep herself as she claims.

It’s pretty funny, in any case, and definitely made funnier by the letterer, a role which maybe more movies should have.

[1] They call this out, which is called lampshading for some reason, in the dialogue. Yes, it’s silly, but you can’t very well have burgeoning pubescent sexual tension in a babysitter horror movie if the kid being sat is age appropriate.
[2] This, on the other hand, is blown right past. Who hires out a weekend babysitter? There’s no way that’s a real thing that people do. 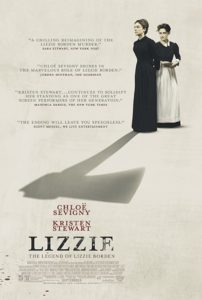 If you’re like me, all you really know about Lizzie Borden is the rhyme about the many whacks she gave her parents, and that it was an axe murder. This week, I learned that it was her stepmother, and also that she was not found guilty of the crime, which I think speaks to the importance of the court of public opinion.

Anyway, all of that has changed, thanks to Lizzie, on Shudder.

Well, okay, none of that has changed. The things I know now that I didn’t know then are just about identical. But I definitely have insight into someone’s idea of how it could have happened, which is a combination ill will between Lizzie and the folks over what her place in society and in the family should be, coupled with a spendthrift uncle set to be named trustee of the inheritance in the will and a psychosexual triangle between Lizzie, her father, and the recently hired Irish maid. So, the odds of all three of those things having happened are pretty low, and that’s even assuming she really did the murders in the first place, which: beats me!

Anyway, for my money, if I’m going to watch a lesbian family murder thriller, it will always be Heavenly Creatures. Which is not to say that this was bad; it’s just that if you’re going to make a one-note movie, you have to make the best one of that note, or else what’s the point?