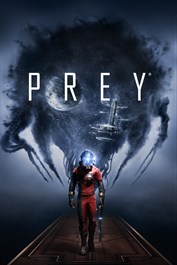 For all that it’s five years old, Prey is one of the best games I’ve ever played, and certainly the best one I’ve finished in recent memory[1]. (I need to get back to Pillars of Eternity. And also Horizon Zero Dawn.)

It is approximately like, what if Half-Life, but extremely modern and therefore with the ability to have and track quests and side quests, and the survivors you meet are actually able to, on occasion, take care of themselves a little bit instead of solely serving to keep you in a somber mood. You can play guns blazing, or extreme stealth, or anything in between, while being as kind or cruel or unconcerned as you prefer. In a different world where I didn’t have an infinite number of massive games I wanted to play, nevermind the smaller ones, I might be inclined to play this again with a different focus. I happen to know there are things I never saw because I played differently than what would have allowed me to see them.

As far as the plot: go in as blind as you can. All I knew was a) praise and b)… actually, I can no longer swear what I knew about b), so it would be unfair to say anything, wouldn’t it? But the game starts off on your first day joining your big brother in the family business. Wake up, get ready, fly across town in a helicopter while the credits roll, then take the evaluation tests you need to pass to go up to the space station where the real magic (by which I mean science) happens. Only, the tests don’t really make even a lick of sense? And why is that table running around, and why are the alarms going off? And then things get weird.

In conclusion, I liked it really a lot. The plot twists never really stopped, no matter how far into the game you think you’ve gotten. I am uncertain about the expansion? But I would play the hell out of a sequel.

[1] “Okay, but what about Hollow Knight?” It’s like this. They are both exemplars of their respective types of game, but Prey has the better plot. HK has the better mood, if that makes you feel okay about things. 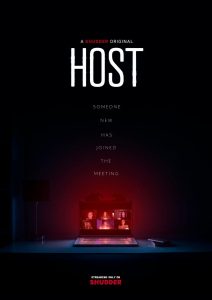 I wonder if there’s a useful distinction to be made between found footage movies and webcam movies. The latter is clearly a subset of the former, but in the age of Covid, there has been an explosion of the webcam footage type. The benefits are obvious: actor separation, no camera man presence, no director presence, set dressing can be done by the actors or at least prior to their presence. I’ll admit, I’m not perfectly clear on how ghostly cabinet slams and other movement based special effects are handled. Maybe by radio control?

Although, to be honest, I wasn’t even entirely sure whether I should review Host. Weighing in at under an hour, is it really distinct from some Sunday evening special TV episode? But then the choice was made at least somewhat for me by my having fought with maybe a thousand spams over the past two weeks, all in the older sections of my site where long overdue updates were needed to modernize the reviews. Since I haven’t watched any other new movies in that span, here we are.

A bunch of British friends (mostly ladies) are on a Zoom call to hold a seance with their hired guide. One or two of the characters seem regularly and visibly upset, which makes me think there was a recent death? But if this was made clear, I do not recall. What quickly[1] is made clear is that something spooky has shown up, and between the seance leader dramatically falling offline and the others not being as good at remotely performing the “nevermind, go home” ritual as they were at performing the “welcome, spirits” ritual in the first place, you know back when they also had leadership, it is only a matter of time[1] before things start to go fubar, supernaturally speaking.

Arguably, I’ve now spoiled the whole movie, but the other option, which would have been mandatory, is to spoil it in the other direction when the webcam seance resulted in nothing interesting happening at all, because that would have been some real bullshit. 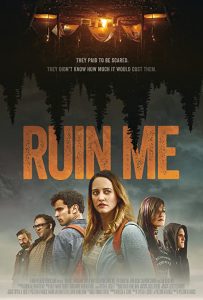 I’ve reviewed at least one or two “extreme” haunted house horror movies lately, and they mostly leave me to conclude that, nah, I don’t want to go to one of those whether it’s a front for a shadowy serial killer ring or not, because I have no interest in taking a chance that they might use the spider shower ploy.

But then Ruin Me comes along, and it actually works on me. The idea is, you signed up for a horror movie weekend. That is, the small group of you thrown together by ticket purchase timing have signed your waivers and been given your safewords, and now you’re dumped off in the woods to survive the weekend. Since that’s clearly not enough to go on, there’s also a gamified escape room aspect to it, where you have to follow clues that lead you into the horror movie proper. Just sitting against a tree waiting for a killer to show up would be pretty boring to film, you know?

Here’s what makes it work, as both a viewer and as a prospective client of the real life version of the concept: there’s a real and to an extent insurmountable tension between the “is this so real because, oh shit, it’s real?!” and “man, they are doing an exceptional job here, which, honestly: if they weren’t, why did I pay so much?” scenarios.

The execution here was not quite perfect, but I’ll forgive a lot when you can keep me guessing for this long and it’s not because you just cheated to get me there. 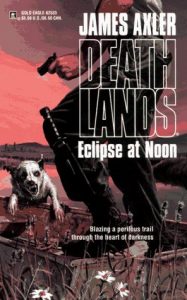 A thing you would have no real reason to remember: Circle Thrice[1] ended on a cliffhanger. (Also, I read that a year ago?? I do not read enough. This is not the first time I’ve said this lately, but.) So anyway, though, cliffhanger.

That aside, Eclipse at Noon is mostly about old enemies and new riverboat rides. I’ve never been on a riverboat, but it mostly sounded like what I expected cruise ships to be like, except for the paddle and all. Also: smaller than that. This continues to make me wonder if cruise ships were just a lot fancier in the ’80s and ’90s versus how they are now, which is sort of middle class chic, for some reason.

Anyway: the story was approximately what I’ve come to expect, with guns and mutants and the promise of more teleporting around (although not any just lately). Also, some random old enemies that we’ve never heard of before, but as good a job as this series does of recycling old encounters into new ones, I cannot fault them for once in a while saying, look, guys, remember this stuff that happened to us before the series started?

The title thing, though: I can perform some mental gymnastics to force a metaphor about how just when things were finally going nicely for the first time in a while, with the cliffhanger resolved and some fancy big meals and a riverboat ride in the offing, oh no, their “high noon” is being “eclipsed” by this sudden old enemy machinations thing, but… yeah, I’d prefer more literal and less maybe metaphorical but maybe just “this sounds kind of cool, right?” titles, for my cheap men’s adventure sci-fi thriller series. I guess I’m just old-fashioned that way.

[1] That is, the previous Deathlands book. 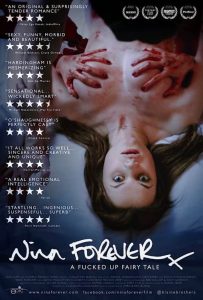 I have never seen a movie like Nina Forever.

It starts off as an earnest in-your-twenties romance movie, with a lot of back and forth cuts between the present and the future, even though those are like ten minutes apart, to demonstrate how artistic and sensitive it all is I think. Then it veers sharply into a horror sex comedy mashup that has to be seen to be believed. And then the sex comedy part gradually erodes, leaving an uncomfortable mix of the original earnest romance movie and an increasingly dark psychological horror movie, of the type you would not have believed possible when that insane mashup part started. And the throughline is constant gore, but with essentially no violence.

Like I said, I’ve never seen its like. At heart, it’s a movie about the stress that prior relationships have on current relationships, and about the difference between 20 and 30. It is sexy, and it is hilarious, and it is dark and foreboding and grim, and I think I recommend it with basically no reservation. (Well, except maybe be old enough for “the difference between 20 and 30” to mean anything at all to you.)