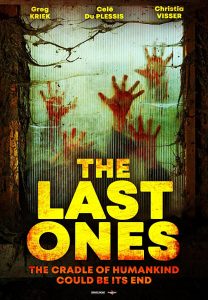 Another zombie movie, this time out of South Africa! With a weird poster that does not accurately reflect the title of the movie. So that’s weird.

Anyway, if you’re looking for a fresh new take on zombies, Last Ones Out isn’t it. Hey look, there are a few survivors out of a hospital who have banded together. Hey look, the jerky American is making everyone hate him. Honestly, I’m bored just trying to think of more things to say.

The only “downside” is it’s exclusive to Shudder, so you have to watch it there. A few years ago, pre-Iron Fist on Netflix and decidedly post- whichever was the last Freddy Krueger[1] movie, Finn Jones and Robert Englund decided to face off in a movie theater, for supremacy!

Okay, that’s not entirely true. Actually, without Englund’s brand recognition and the movie streaming on Shudder to make it really clear what you’ll get, The Last Showing spends at least the first act of the movie being a character study on how we dispose of the elderly, for really no reason at all. Not-Freddy has worked as a film projectionist for decades, but due to his unwillingness[2] to get certified on the latest digital equipment in a classroom with sixteen year old part timers, he has been relegated to serving popcorn and sweeping and the kinds of things that the aforementioned sixteen year olds usually end up doing.

So he snaps, of course, and Not Danny Rand and girlfriend randomly end up as the focus of his snapping. Everything else is plot spoilers and a different character study in how just because you think you’d be great at something doesn’t make you great. Not all dreams can come true! But there’s the kernel of a serious film buried down in the middle of the running around a theater yelling at killers and toying with victims that is the schlocky meat of the thing.

The irony is that Englund is and has always been a pretty good actor, and dropping him in the role of someone who is not as suited to a thing as he believes himself to be is a little mean-spirited.

[1] To me, though, he’ll always be Willy in V
[2] Not because he resents the technological upgrades, but because the new equipment is legitimately easier to use in the first place and he doesn’t need the training, only the cert, and man, certs for their own sake are dumb. I watched another movie this week, which was Summer of 84. This is a pretty basic horror movie which combines Gen X childhood nostalgia for the summer of our youth with Rear Window. And now I have to come up with more to say.

It is not a complaint that I can sum up the movie that succinctly. There’s something to be said for nostalgia, especially when it’s nostalgia for what other people had. I never really made friends in my neighborhood, the way I read about in Stephen King novels or see in kid movies from the 1980s and earlier. Like, I definitely had friends, but private school through elementary (or, and this is plausible, most of the kids my age in my neighborhood were just assholes) meant that I never made close local bonds with those people. So any hanging out was a carefully scheduled affair, not just going outside on a summer evening for a giant game of hide and seek, or constant contact via walkie-talkies no matter how late at night. Also, the suburbs are different from small towns.

Anyway, that’s really the movie. Teenage newspaper boy and friends in a cluster of small towns where a serial killer has been murdering tween and teenage boys, even though tween was not a word that existed at the time. And one of them (guess which one!) thinks he saw something suspicious happen across the street, at the home of the bachelor cop on the cul-de-sac. And either the kid has an overactive imagination, or the cop is legit terrifying, which all depends upon your perspective and your expectations about how the movie will go, and I wish I could add something I found offputting, but it would guaranteed be a confirmation spoiler about which movie they’re making. Maybe in a comment, if anyone cares. (Note that this being a horror movie does not inform that tension’s outcome, because there’s definitely a serial killer, no matter whether it’s the neighbor cop or not.)