I am annoyed right now, because of how I’m thinking about this movie and I want to talk about facets of it, and instead I’m being made to feel guilty for examining those facets rather than committing to a single opinion, full stop, the end. However, guilt is for Catholics and people in jail, and terrorists who haven’t been charged with crimes of course; most importantly, not for me. So, Humbug, I say. Also, I say Silent Hill.

So there’s this game, right, and they made a movie. That nearly never ends well, and not least because they mostly only make movies based on good and popular games. (It is a source of surprise to me, how much more often popular equates with good in the video game arena than in the movie or literary arenas. I wonder if I’m wrong, really. But let’s assume not, as it makes it easier for me to continue with my thoughts, here.) So, there’s automatically farther to fall, as your built-in audience will necessarily be more judgmental than otherwise.

Silent Hill the game was creepy of atmosphere and mysterious of plot, only providing drips and drabs to explain what was really going on while keeping you on edge throughout. The movie provided both the best and the worst of that, more’s the pity. Because it tried very hard to be a good movie, and I can see the good movie lurking just beneath the surface. Nevertheless, it never really surfaced.

Silent Hill the movie is the story of a woman trying to penetrate the mystery of her adopted daughter’s nightmares and accompanying sleepwalking. So she takes the girl to the place those dreams speak of, a ghost town called Silent Hill. (I know, it was a shock to me, too, the coincidence of that name with the movie’s title. But I resuspended my disbelief and soldiered on.) Only, their arrival is marred by a car accident that knocks out the woman just long enough for her daughter to vanish. After that, all that’s left is to find her, and that means unravelling the mystery behind the town and its death.

The audio and the visuals were both brilliant, evocative, and a joy to behold. Perhaps a dread to behold would be more accurate, but I like what I like, and joy is the word for me. Also, I liked the music. The plot, however… possibly forgivable gaming tropes were overshadowed by an unforgivably dense plot, and the side story of the woman’s husband that had no right to be in the script at all. The good news is this: I don’t have to concern myself with the good movie that I kept nearly seeing, because I’ve got these games that totally make up for it.

I had this idea to read an old science fiction novel that I’ve never really opened before. So, I found a copy and the time was ripe, and I started reading. Then, about three chapters in, I left it in the theater after Slither, and despite a lack of shows between then and when I showed up the next day to ask after it: gone! Thusly, the book closest to hand was the next Anita Blake, and I read that instead.

And then, I waited for days to say anything about it, because although I enjoyed it, I’m running out of things to say. The Lunatic Cafe had yet another reasonably good mystery (not feasibly solvable like Veronica Mars, but fun to watch unfold), still more wacky dating hijinks with local vampires and werewolves, and a heroine whose pluck has not diminished over the half-year I’ve been reading. In short, if the first one was readable, this one is too. But it’s not really any different, except for the plot and incremental growth in character depth. So, y’know. 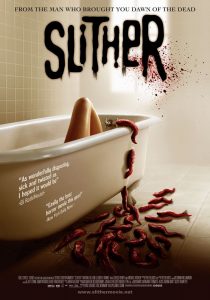 You know Creepshow? Well, obviously you do; I didn’t mean to be insulting. So, here’s my point. Imagine if the meteor that turned Stephen King into a plant instead landed in Hicksburg, The South, USA and got all The Thing on the local residents, and then it and Malcolm Reynolds got into a competition for the same girlfriend. In this circumstance, you would be watching Slither, an excellent space monster movie that is inexplicably failing to sell tickets. I mean, this movie has alien cow-tipping!

More impressively even than that, though, it has that degree of reality that I was just praising in The Hills Have Eyes, where it feels like actual people are in this actual situation, somewhere just down the road and not in my life only through sheer geographic and temporal luck. Which is quite a feat for an alien-in-a-meteor flick. So, good on them.

Also? Someone I’ve had drinks with was in the credits. That’s never not cool. 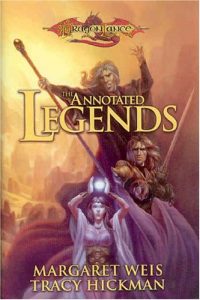 Previously, I claimed that the Dragonlance Chronicles stood head and shoulders above most of what I was reading at that time (other TSR books, Piers Anthony, etc.). I made this claim with perfect honesty and no malice aforethought. Be that as it may, it falls under that thing that we classify as ‘damning with faint praise’.

To my delight, I still find that the Dragonlance Legends are genuinely good in their own right, better than some of the books that lie ahead on my reading list over the next few months. They’re not great, or life-changing, or even wonders of prose. But they tell a story personal enough to satisfy people with no interest in the sci-fi/fantasy genre (y’know, if they were to read it, which they would not) with a scope that is epic enough to satisfy people who would refuse to read anything else. I find that usually the balance is not there. And there’s something about a good story that allows me to forgive the occasional mistakes in execution, which of course existed. I mean, yeah, I like it a lot, but it’s still from TSR.

This is all good news for me, because the annotative part of the book was a lot less well done than in the previous volume. The authors did fine, of course, as one would expect, and the poet guy too. Instead of comments all over from the design team, though, there’s one unidentified annotator covering everything else. And everything else consists of, in this case, pointing bright flashing neon signs at already sufficiently obvious thematic elements, removing any hope of subtlety. That, and pausing at any point where a moment from the past has been referenced in the text to explain exactly in what book and chapter said event first occurred. This “helpful” dissemination of information eventually came to include references to earlier points in the current book. Seriously. So, so aggravating. And I couldn’t even find a name of someone to blame, anywhere in the book.

As part of an excellent evening out in Fort Worth this weekend, I saw Inside Man. (Because my mom has this weird thing where if a movie has alien slugs that mutate people and/or turn them into zombies (or has a name like Slither), for some reason she pre-judges it and assumes she won’t like it. This is an ongoing mystery to me, but I must live with it.) So, bank heist, Denzel, I can dig it.

And it seems like, after enjoying it from start to finish, I’d have quite a lot of good to say. Good acting, good piece-by-piece reveal of the puzzle that was the point of the thing… okay, I’m out of good things, and that’s just it. It was like a cream puff, or light popcorn to pick a rather more trite metaphor. You enjoy it while you’re eating it, but after all, it’s mostly air and hard to describe why it was as good as that once you’re not right in the midst of it. I think it’s the plot was neither unique nor tense enough to carry it up out of the realms of summer movie, and that the collective star charisma power wasn’t either. That summer thing is the single biggest flaw, though. I’m pretty sure if it had come out four months later, I’d have been able to completely overlook the flaw of being overdone. That’s what July is for.