Palm Springs is a “the less you know a 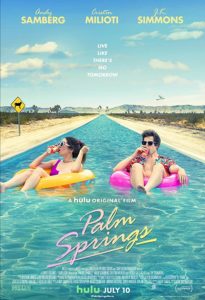 bout it the better” comedy in which Andy Samberg (one of The Lonely Island, or, if you’re not me, the lead in Brooklyn Nine-Nine) interacts with a destination wedding and the bridesmaids thereof, over the course of an interminable wedding day. (I mean, it’s only like an hour and a half or two hours, because, movie.)

The problem I have now is how to fill at least enough space to match the poster. Um. It’s funny! It’s also philosophical and has characters that change and grow. Which is three things that a lot of comedies don’t have, even though almost all of them should have at least two of those things.

Plus, it’s on Hulu, and apparently they made it. Which I think means it’s technically free unless they changed their online viewing policies, which, how would I know? But man, I hope it doesn’t have commercial interruptions. Anyway, check it out! Off of a dare[1] on Wednesday night before Thanksgiving, I turned on Thankskilling while setting my fantasy football line-ups. I ended up watching all sixty-six minutes of the feature due to Mary falling asleep on the couch before I finished my research.

I had said, after watching the first 100 seconds, before the title drop, that they had accomplished pretty much the perfect iteration of that title in distilled movie form, and that I bet the rest of the movie could not stand up to it. It turns out, I was right.

[1] I was bet that it had worse dialogue than Troll 2. Nnnnnnnope.