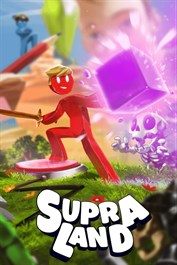 Supraland is falling off Game Pass in a few days, which means acknowledging to myself that I’m not going to find the rest of the secret stuff I had been unrealistically holding out for before I wrote my review. The fact that I wanted to do all of the secret things well after the end of the plot is probably a good sign as to how I felt about the game, so I will say it has a lot of weird glitchy spaces in it that make it hard to tell when something is hard because it’s meant to be hard and when it’s hard because something isn’t working right. There are flaws!

That said: man, I don’t think I’ve invested in a 3D platformer this hard since Super Mario 64[1] in the ’90s. You the character are the prince of the red people, who live across the sandbox from the blue people, over which[2] very occasionally presides The Boy. And you are sent on a quest to resolve the red kingdom’s suspicious water shortage, with only your trusty wooden sword against the hordes of skeletons that for some reason infest the long, barren space between the kingdoms. Lots of fighting, lots of puzzles, lots of powerups. It’s a collector’s paradise out there, and slightly buggy or not, it’s easy to recommend to anyone who likes the genre.

[1] At somewhere in the 90-105 out of 120 stars range, I loaned the cartridge out, and my save game was deleted, even though there were empty saves available! (At least I’m over it, right?)
[2] Over the sandbox, that is, not over the blue people specifically. 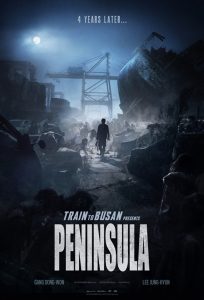 Train to Busan Presents: Peninsula is the second entry in the TtBCU[1], and even though it wasn’t on the list of Korean horror films for last(?)[2] week, I did the research and confirmed for myself that it counted (same director and writer as Train to Busan, and made by South Korean companies). So, that’s what we watched!

As discussed in the tagline, the movie is set four years after the events on the train, and in that time… well, the short version is North Korea was finally useful for something besides human misery. Since South Korea is on an isolated peninsula[3], they were able to use their otherwise pointless and/or actively evil military to contain the zombies, and then everyone else just stopped letting escaping boats in without incredibly onerous health checks of the kind that I think we’ve proven would not actually occur in the real world, but. And so, South Korea is a zombie-infested wasteland, and the rest of the world is all, “Huh. I guess that happened.” And the few people who did get out are mostly disliked refugees, so at least they got that part of how we’d behave correct.

Anyway, that’s all setting for a heist-and-redemption story precipitated by an army guy and his embittered brother-in-law being roped into a shot at 50% of the take on a truck full of money just sitting there, waiting to be taken by whoever can survive. It has every trope you’d expect and then some, but you know what? I liked it. (Arguably, that’s why I liked it?)

[1] There is no TtBCU
[2] When I started this, we were potentially only a week behind. A lot of water has passed under the bridge between then and when I finished it.
[3] Hey, I see what they did there!