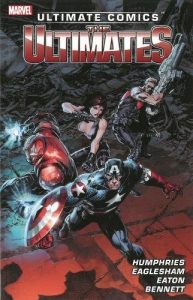 So there was this big Civil War that happened in the Ultimate universe. I mean, not between superheroes, they just did that in mainstream, and boy howdy have I no idea when I’ll get there to see it. No, this was straight up a bunch of warring American factions as the country fell apart. Also, Hydra. (They’re a (let’s say) terrorist organization on American soil, fighting against, or for… something, I guess? At least in the ’60s, it was just plain old world domination. I have no clue what new Hydra actually wants, though. I don’t even know if that’s bad writing (probably[1]) or a clue about something I may learn someday.)

Anyway, there was a civil war. Thus, the next step, Reconstruction. Which basically consists of Captain America, in his new position, moving from crisis to crisis as Hydra, California, and other collections of basically terrible people try to take advantage of the still fragile situation for their own various, nefarious purposes. Other boxes being ticked off: the West Coast Ultimates, and Vision. You may think, no no, they already did the Vision, right? Someone disagreed that it was done on enough of a 1:1 correlation, is all I can say in answer. Well, unless I want to get impolite and say that someone thought it hadn’t been done derivatively enough? But that would make it sound like I hated this book, and I didn’t. I’m just very aware of its limitations.

Good news: the really bad idea of a job that Cap took? I think they’ve reset it back to status quo, so I’m hoping that fixes the rest of the problems by the time I read Volume Oh Good, We’re Back to 2 Again.

[1] In that they may just exist so someone can check off the “Did we use Hydra yet?” tickbox, and that someone failed to consider what specific goals / desires new Hydra should have. This book gives them a goal, but it is a reaction to something that happened after they were formed, so their original goal? Completely unknown to me. Despite how far behind I am, I probably would not have read this yet, except I realized about three issues in that I had it backwards with the Jack of Fables I just finished, regarding publication order. So I went ahead and fixed that, as you’ve seen, but then: already three issues in, may as well read the rest. And so here we are, at the end of the twelfth volume in the Fables series, The Dark Ages.

Which, okay, that title doesn’t make much sense when you consider that they just won the war against the Adversary (whose name I should probably stop inching around, to be honest) and Fabletown is no longer in imminent danger, right? Sure, the Empire is still out there, mostly holding all the old lands through numbers and inertia, but it’s a headless snake now, and any heads that develop will at least be smaller and less dangerous. Right?

Let’s just say that any fears I may have expressed about the story’s ability to soldier on in the absence of its initiating premise have been laid to rest, and in rather dramatic and literal fashion at that. A really cool thing happened a couple of months ago, which was that a new Locke Lamora book was released. Since I rather liked the first one a lot[1], this was naturally exciting to me. But then, I realized that it had been five years since I last read one of these books, and, well, I didn’t exactly remember what had happened. Broad strokes yes (and mostly accurately, as it happens), but fine character and plot details, not so much.

I won’t drag this out, both because I’ve already been here before and because I have plenty of things I’d like to be reading right now. First: yes, I still like this book a very great deal. With a five year veil, everything I didn’t remember took on the sheen of awesomeness, amusement, sick horror, and exhilaration that I’m sure it had the first time through. The one thing I did pick up on that I certainly missed before was Locke’s overwhelming pride in the first third of the book. It really stands out in sharp relief when you know just how hard the left turn is about to be.

Anyway, really cool story, stands alone, well worth the read. And I’ve been told that you don’t actually have to reread these to prepare for the new book in the series. While I’m sure that’s true and while I regret that I haven’t read the new one yet myself, I regret it in the way I regret the other dozen or so books that I want to read right this instant. In no way do I regret the reread.