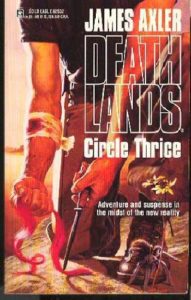 Nearly a year since the last Deathlands. Oops? But between a global pandemic and a new son, I’ve had things going on. …boy howdy. Things.

Circle Thrice is a weird book, even by the standards of the series so far. For one thing, it’s highly episodic. Except for the fact that our post-apocalyptic teleporting companions are not literally on the Mississippi River (it’s the Tennessee instead), the first two thirds of the story remind me a lot of Huckleberry Finn. Because there they go, downriver[1] on a raft, running into various weird people and situations[2] without very much fear of consequence, because, as you know by now, our heroes are very well-armed and other people generally are not. It’s a peaceful interlude, if you correct for mutant death around every corner.

Later, in the last third, we get to a more typical “heroes run into a baron who may not have their best interests in mind and/or former enemy makes a new appearance” situation, and that part is fine as well. I guess a thing I like about these books is that, 32 volumes in, they are simultaneously comfort food and something I’ve never read before. It’s not like I’m getting bored, clearly. Probably because they still keep me guessing with things like the first two aforementioned thirds, and with things like wondering if that wound that keeps being mentioned and which keeps not getting resolved is going to turn into a really big deal major character death or in fact is just an oops, need to stretch more and maybe take it easy for a day or so. It’s nice to not know for sure, instead of seeing it coming from miles away.

Also, though, the book title? It feels like a religious or especially pagan religious reference, right? No idea if it is one, my briefest of googles tells me not especially, but man it sounds like it. Also, it doesn’t mean a single thing relative to the story being told. Nothing. Pick any other random imperative verb and slightly archaic modifier, and it would fit equally well here.

[1] Did Huck and Jim go upriver? Because on the one hand, how do you stop being a slave by going farther south? But on the other hand, raft + river rarely results in an upriver trip. How is this the first time I’m asking myself this question?
[2] Villagers who have a raft that needs stealing. Non-consensual BDSM priest. Tour of the Civil War battlefield of Shiloh. Graceland[3]. Rabid villagers (not the same ones as the ones with the raft).
[3] Look. I’m not saying it’s on the Tennessee River. I’m not even saying the writer is saying that. It’s just another episodic thing that happened. They don’t all have to tie directly to the raft, okay? 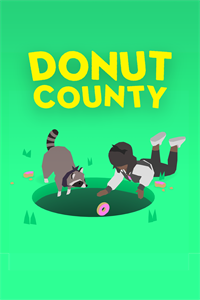 The thing about Donut County is, it’s barely a game at all[1].

But if you can get past that, it’s pretty fun and funny. It’s approximately a knockoff of Katamari Damacy, but instead of rolling things up, you are a hole in the ground, and you are swallowing said things. Donut County is a county somewhere near alternate Los Angeles I guess?, inhabited by all manner of sentient animals and also for some reason this one girl. The only problem is that everyone and everything keeps disappearing into holes in the ground.

Who could be causing this? And why? And will you ever get to fly the sweet quadcopter that you can unlock if you reach level 10?

Anyway: as two hour games go, I definitely got my money and time investment’s worth.

[1] This is not entirely true. The last third adds more game elements, such that by the end, there’s some game there.