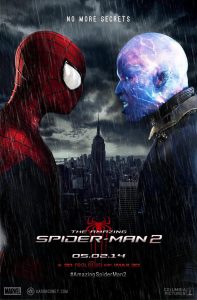 Can I just say I’m really happy that Spider-Man got rebooted? I would not have predicted feeling that way, but after two movies into the current franchise, it is become more and more clear to me that Tobey Maguire’s take just didn’t really cut it. It’s true, Peter Parker has a really hard life; but he’s not a sad, mopey person, and that’s what we got out of the previous trilogy. (Yes, the second movie starring Doctor Octopus was still incredibly done every step of the way, and my realizations do not take away from that in the tiniest regard.)

There are plenty of things that work better about this new series. I’ve already mentioned how the seeds of sequels are planted here and there and all over the place, just as though it’s a living, breathing world in which all relevant information doesn’t happen in the same segment but instead gets spread out over time. Comics weren’t episodic in the 1960s at the latest, TV has stopped being episodic as of the 1990s, and if serial movies can make the transition? All the better for me! (And, I would argue, the viewing public in general, but nothing pleases everybody, regardless of how much it ought to do.)

As for the movie in question? Clearly, I am still okay with the basic structure and with the way the characters are being acted. Gwen Stacy is a strong, modern woman who actively contributes and makes her own damn choices[1], Spider-Man runs at a quip a minute, Oscorp is a creepy company that has its tendrils into everything, etc., ad nauseum, this is Spider-Man done right nearly as much as Marvel is doing its own properties right in the expanded Avengers franchise; my only complaint, if any, is that they aren’t all in the same world, as God and Stan Lee intended. And the story is pretty good too! Nearly everyone is paying for the sins of the past, sins none of the players actually committed. It’s not a new plot, but it’s one you can’t really go wrong with. Plus, usually that plot doesn’t star Jamie Foxx as a being of pure electrical energy with an inferiority complex. It’s cool, you can’t go wrong with that plot element either.

[1]  Which, okay, Mary Jane was doing by the 1960s also, and I guess you can see yet another reason why I’ve always been enamored of these comics.

So, it happened the way I thought! (You know, thanks to the twin powers of authorial foreshadowing, logical consequences of previous actions, and foreknowledge of the subsequent book’s title. ….er, triplet powers.) Sure enough, all those inter-related Literals (who are living representations of various literary terms[1]) have proceeded with the war against each other to determine the fate of the Fables, who they all agree that they dislike immensely but apparently hate each others’ Final Solutions enough to shed each others’ blood rallying for their own specific cause.

You can imagine how that turns out for the Fables, I suppose, since this is a story and not real life. Plus also, there’s good old deceit-filled, beanstalk-climbing, always-has-an-angle Jack fighting on the side of himself, which is to say that he doesn’t want all the Fables to be destroyed since he is one and all. So: big war? Cool. Deeper understanding of what’s actually going on? Definitely cool, even if there are still pretty big gaps. Overall: it is 100% clear that the Jack stories just aren’t nearly as good as the main sequence Fable stories, and in fact that Jack himself is starting to be as unlikable to me as he was probably supposed to be all along on top of it; but still, they’re diverting enough to keep reading. (It helps that I know there aren’t many left.)