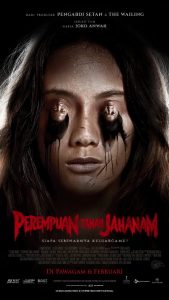 I think I like the Indonesian title better. “Woman of the damned land” is kind of badass, you know? Whereas, I cannot really determine what Impetigore is supposed to mean. My best guess is that it’s a portmanteau of the Latin “impetigo”, meaning to rush upon and attack, and “gore”, meaning buckle up and get ready for buckets of the stuff. And I’m sure that by Indonesian standards there was rather a lot of the stuff? Nah, that’s not fair. Whatever else this was, it was not a tame movie.

Imagine, if you will, that you are a broke-ass tollbooth attendant trying to determine how to make ends meet with your best friend who is also a broke-ass tollbooth attendant, only she’s a little more worldly than you are, and there’s been this creepy guy perving on you for a few days in a row, and now he’s identified you as a person with a different name from a village so small it isn’t on the map, and also tried to kill you with a machete because they in the village don’t want “your” curse anymore. So you dig through stuff your aunt left you when she died, and find indications that your long dead parents did in fact come from that village, and they have exactly one picture of you, when you were five right before they died and you went to live with your aunt, and as if it weren’t weird enough to only have the one picture, that picture has the name the machete-wielding perv called you by.

If I were that girl, I’d maybe run away from Indonesia or something? Not her. She sees the big expensive house in the background, and, remembering that they are both broke-ass 20-somethings, they decide to hare off to the remote village so they can sell the house and stop being quite so poor, even if the village is populated by the kind of dead-eyed people you would expect to find in Resident Evil 4.

All’s I’m saying is a) that is a really good setup, and b) between this and Satan’s Slaves (by the same director and producers), it’s fair to say that Indonesian horror cinema is having a moment. 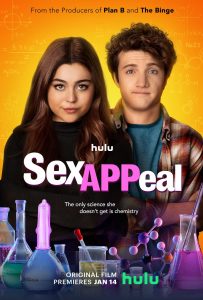 What if a teen sex comedy, but without anything explicit (other than the language)? Actually, it a) worked pretty well[1] and b) was surprisingly sweet. Sex Appeal tells the story of a STEM-focused high school valedictorian[2] who is unexpectedly confronted with a concept she’s never had to consider before. (It’s, uh, a partner who is interested in a physical relationship.) So, she decides to kill two birds with one stone by creating as her entry into an upcoming competition a phone app that coaches people into having great sex.

Unfortunately, she’s an emotionless robot, and the people around her who are tasked with experimenting to get everything just right aren’t[3]. It was funny, though probably not funny enough that I shouldn’t have watched something on Shudder instead. But I will say that at no point was it predictable, and that’s not nothing.

[1] The metaphors that replaced the sex scenes were the correct amount of over the top, for example. Perhaps not the “hilarious” that they were going for, but definitely lavishly overstated.
[2] The kind that only exist in movies, who are given the run of the school, can interrupt anything at any time with no consequences, can even ignore classes that they consider irrelevant and nevertheless the faculty all love them. Movies are weird, yo.
[3] Aren’t emotionless robots, not aren’t people. It’s not that kind of movie. 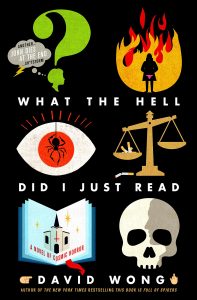 To my surprise, a third John Dies at the End book has existed for nearly five years. So… oops, I guess? I almost want to reread these, because of how long it’s been, and particularly because of how accurate the current title is, but then I remember I’d probably get spiders everywhere, so maybe not just yet.

David Wong and John Cheese are at it again, and by “it”, I mean being forced into solving weird problems that nobody else understands, because everyone else is either too annoyed to deal with said problems, or else too dead. In this case, they’re trying to figure out who is kidnapping local children, and why nobody’s memories on the topic quite match up with anybody else’s, or for that matter, with reality, and also why… well, they’re trying to figure out a lot of things, and following that rabbit hole too deep would lead to me just typing out the book, more or less.

What the Hell Did I Just Read is for the most part as weird and inexplicably funny as you’d expect based on the prior books, while also being darker than I remember those being, and also also being at least moderately authorial therapy. (Or maybe not! I don’t know the man who wrote the book, but it feels that way all the same.) I’m only inclined to say it’s weirder than the other books because I haven’t read them in a very long time. Nevertheless, this feels true. Even if you leave out the big obvious reason why I’m saying that, what about the snowman? 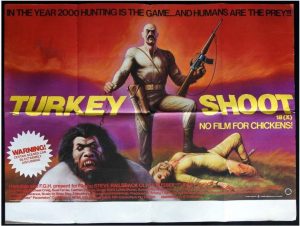 Freedom is obedience, obedience is work, work is life.

Turkey Shoot is an Australian early ’80s era imagining of the fascist (or maybe Soviet communist?) dystopian future of a generation thence, where all undesirables are sent to re-education camps, only nobody ever seems to actually get re-educated enough to leave. And in the meantime there’s plenty of physical and sexual abuse by the guards to go around. I started to add “and mental abuse”, a la the camp’s number one lesson presented above to get people back to the right way of thinking so they could rejoin the Nation’s Great Society, but I guess that’s baked into “re-education camp” in the first place, innit?

I think fascist / communist hybrid is what they must have been going for. Or maybe Soviet communism was always basically fascist, but we focused on the economic system part because the Nazis had already been beaten and fascism was over? I dunno.

Anyway, the camp is the setting. At the end of act one, the actual plot is introduced, in which some rich people who were probably also political bigwigs were invited to hunt the most dangerous game. So a handful of the characters we’ve been given reason to care about are chosen as the hunted, and then there’s a big hunt in which things go pretty much as you’d probably expect, especially if you expected a random werewolf guy to be involved. 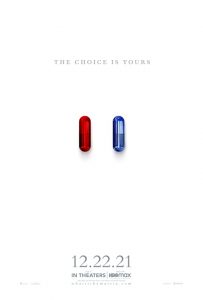 But first, a few words about makeup and set dressing. I appreciated that the omnipresent dark green drear was replaced by nonstop blues, representing of course the blue pill seen on the right. I won’t go into specifics, of course, but I liked the way the truth of the Matrix was kept while jettisoning the old color palette, and I liked that this occurred for a good in-story reason. As for the makeup bit, upon reflection it would be a pretty big spoiler, so I may bring it up later. But, I was equally impressed with someone’s job there as well.

Anyway, in order: it was not a giant retcon, and it was also not a bad retcon, by virtue of the retcon not being the one I expected. A retcon certainly occurred, but I approve on the whole. It’s the kind that reveals how the world really was always this way and we just hadn’t noticed, not the bad kind that gets a writer out of a dumb corner they could have avoided on either the front end or the back with no real trouble, had they but tried. And it was a good movie if you accept that all the fun being poked is at itself for existing and not at you for being suckered into paying for it to have existed. Or if you forgive all that because it used White Rabbit really well. (Man I love that song.)

The rest, below the spoiler cut.

END_OF_DOCUMENT_TOKEN_TO_BE_REPLACED 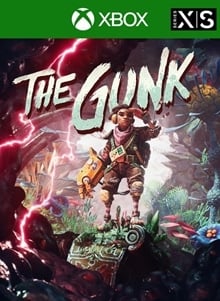 For the first time in probably literally ever, I have played a new game, to completion, within a fortnight of its release[3]. Even accounting for its being a relatively short game, my counterpoint is that I didn’t play it for about a week in the middle, what with Christmas and having a child and all that this entails. My points are a) wow and b) look for this to never happen again, like, ever.

The Gunk is the story of a pair of… long haul truckers? junk traders? if I’m being real, what they actually do is not perfectly laid out, except that they for sure do it in space and in the future. But then they pick up an energy reading from an otherwise dead planet, and the idealistic exploratory character (as opposed to the hard-bitten cynical character or the helpful, low-vocabulary character) insists on checking things out. What follows is an exploration platformer game where you quickly discover that there are these piles of purple, bulbous, well, gunk all over the place, and that if you hoover it up using your power glove[1], all of the plant life recovers from a dormant state, and weird pools of energy that are for sure some portion of what the readings were and which have additional uses in the moment are also revealed.

And then you explore around, trying to figure out why and what everything is, and not incidentally make some money along the way, due to your semi-apparent day job overlapping with this kind of discovery. Later still, there are conflicts.[2]

As this kind of game goes, it is clearly not as good as your Marios and your Banjos-Kazooie for the fact of the game play and collectiony bits. But it has probably a better, more engrossing plot than those have, and also only plays for like six to eight hours rather than sixty to eighty. Those facts may be related, come to think of it. But also, they don’t handhold you. I thought I explored everywhere, and I certainly tried to, but even though I got the scan everything achievement, I could not manage the build everything achievement.

I’d play a sequel game with these characters, though, so.

[1] Where it ends up is not particularly a topic of interest to the game writers, who, to make two points in one footnote, were clearly enamored of but never owned a certain late ’80s NES accessory.
[2] What??? I know, right.
[3] And then forgot to post for nearly another week. *sigh*