As you can see, I’ve been kinda busy this weekend, with all the movies being watched and whatnot. The thing is, the whole moving thing has pushed me way behind. Even now, there are two theatrical releases I’d like to hit, and two more just days off. So, it’s nice to take a few moments of breathing space and enjoy myself. Which I did do, and the result is all this.

To wit, Batman Begins, the apparent start of a new DC movie franchise to finally compete with 5 years of Marvel supremacy. It’s tempting to claim that the franchise had small shoes to fill, what with the oddity of Batman Returns and the horror of the two later sequels to the original, but this was a genuinely good superhero movie in its own right, in the same quality tier as Spider-Man.

With so many quality stars in supporting roles, of course the acting was great. The leads did well too; Katie Holmes hit her usual eye candy marks with ease, and I’m not very sure what the complaints I’ve heard about her acting were based on. She did perfectly fine in every scene I watched. Nothing that cried out for an award, but not everything has to.

As with all origin stories that are completely familiar to the viewer, a big part of the fun was in watching the characters come together. Jim Gordon’s first meeting with Batman, Alfred transitioning so smoothly into the parental role, the very first Bat signal: all as iconic as they should have been.

Thematically is where it was a giant, though. In the opening act, the movie did a better job of explaining the Jedi/Sith dichotomy than George Lucas ever has, no matter how hard I’ve tried to read between the lines. The League of Shadows’ method of improving the world one fallen city at a time despite the individual cost in lives perfectly nails everything that Anakin Skywalker never had a sufficiently good script to say in the second and third prequel films. So, that made me fairly sad for my fandom, but happy for the potential future Batman movies, as long as they keep the same team working on scripts and direction. 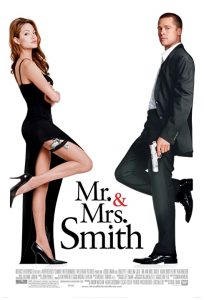 There’s not a lot for me easily to say about this movie, because the premise is so simple. It all worked, I’ll say that. Good comedy, good action, good acting, a few bits of true cleverness. It made me (and the rest of the sparse early Sunday audience) giggle throughout.

The previews spell out the plot pretty well, so I consider this plot synopsis to be spoiler-free: Brad Pitt and Angelina Jolie (who looks as good as ever, I must say) are assassins who don’t know about each other despite several years of marriage. The marriage is drying up, when suddenly they discover the Truth. Hijinx ensue.

I spent the first forty-five minutes or so enjoying myself, but slightly confused. It was moving way, way to slowly for the action-comedy I was expecting to see. Then, something shifted in my head, I reclassified it as a comedy of manners but with assassins (dark, sure, but not even black comedy), and instantly it worked better than ever. Probably better than the average comedy of manners if you’re me, because of how assassins are more interesting than the rich people that usually fill out that subtype. 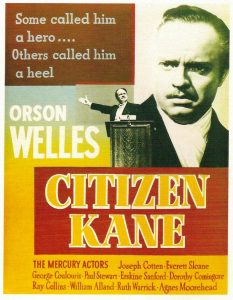 A new feature in my life is the weekly movie night on Fridays, this whole big thing where a group of my local friends and I gather together and watch a movie. Not always good, not always important, often both. I’ll never know what it is next until the day comes, and that’s just how it’s gonna be.

This week, Citizen Kane, the original spoiler-at-the-end film. If you don’t know what Rosebud means, I suppose I can go ahead and not say. In some ways, though, I think viewing the movie was more enjoyable for knowing and being able to watch it happen, instead of wondering the whole time like the audience was supposed to back in the day.

As far as the brilliance of the movie, well, it had its good points. Lots of innovative cinematography that I was unable to appreciate. In a way, it’s hard to credit that film is the same basic physical thing it was 65 years ago; the part where the way it’s used has changed dramatically was inevitable, so innovative for then gets as far as looks pretty decent for now. The acting was top notch, which doesn’t surprise me. It had better be, if you’re going to call something the best movie of all time, AFI.

The downside was the plot. Sure, the quest for Rosebud worked fine, but all the little stories on Kane’s life that were the true point of the movie? I felt like those failed me. There was some crucial point where Kane shifted from youthful idealism to nonchalant decadence, and I was completely unable to tell what it was. I have my guesses, and maybe the point is that we don’t know how it happened, only that it did. But it felt like a missing piece of the movie, and considering how engrossed I was in the story, it was very disappointing to have this sudden paradigm shift in character and not be able to understand what happened.

Anyway, if you haven’t seen it yet, you should; it’s that kind of movie. But don’t feel pressured about it or anything. It’ll keep. 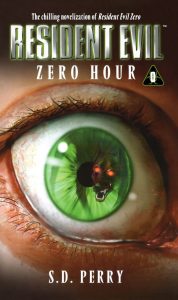 So far, there are seven books in the Resident Evil series; of those, five of them are based on entries in the videogame series of the same name. The most recent, Zero Hour, is a prequel in much the same way that the game Resident Evil Zero was. Well, ha ha, that’s an understatement, since it’s not only a novelization of that game, but also the most by-the-numbers novelization of the whole series.

Credit where it’s due, the author has taken on a somewhat herculean task here. It’s hard to write the book of a game whose main focuses (after shooting zombies, I mean) are holding onto ammunition and solving crazy spy puzzles, without devolving into ridiculous parody. Somehow, she manages to take it all seriously, in part by paradoxically keeping the characters aware of the farce of it all. There are things you accept in a game that nobody would in real life, and the ability to roll their eyes at having to light the lamps in the right order to release the gate is exactly the same kind of ability that keeps them sane in the face of bio-engineered hordes thirsty for their blood. And, y’know, their juicy, delicious brains.

On the downside, like I said, this is the least good adaptation. Sure, the characters are allowed to get out of some fights in a way that the game characters are not, and sure, they laugh at the craziness, but I’m pretty sure I don’t remember ever reading a quite so faithful account of what weapons and ammo are picked up when, and how close they are to running out. But, other than how badly that grates, it’s a perfectly serviceable book of its type, and as in other entries in the series, she adds touches here and there that make the book hers outside the confines of the games. Still, if you don’t just absolutely adore the whole Umbrella-verse, there’s no point to picking it (or any of the others) up. 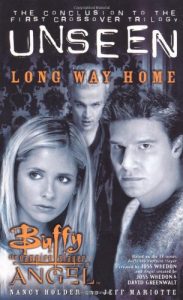 In retrospect, I’m glad I didn’t figure out how deeply flawed the final volume of that Buffy/Angel crossover series was until the last 50 pages or so. Because, I have this habit of not letting things go, however terrible, until I’m through with them, and it would have sucked to bitch to myself constantly for 300 pages instead of only 50. Seriously. There was this bowl of queso at lunch yesterday that tasted truly awful, but I kept re-tasting it because part of it reminded me of some other taste, and I couldn’t quite put my, er, tongue on it. Meanwhile, my co-diner was actually throwing up due to the chemical poisoning from whatever plastic thing had melted into the queso mix. I’d like to think that if she’d been throwing up before I kept re-tasting, that would have stopped me. I really, really would love to think that.

Sadly, that story was more metaphor than digression. There are good Buffy books out there, as much as any randomly farmed out novelisation franchise can have quality. This trilogy, as I’ve said basically from start to finish, does not reach that low watermark. The banter and adventure is, y’know, fine. The storyline, though, got just about as bad as it could have. The thing I figured out 50 pages from the end is that they had no possible way to satisfactorily conclude the story. I was wrong in that, and I admit it; they wrapped up without taking any cheap shortcuts as I expected. No, I spotted the real problem after the fact, which was that it should have been those 50 pages all along, and that the 250 previous pages were nothing but an artificially induced delay to make it long enough to be a trilogy, since that’s what the authors had promised to their bookfarm foreman.

My point being, Long Way Home is easily the worst-plotted book of a pretty bad trilogy, in which the first volume failed to deliver on even a freaking crossover. There’s a Batman book I read in my middle youth, in which someone decided to write a polemic decrying the child sex trade (a topic which until that moment had been mostly the subject of widespread praise, I’m sure) and thought that it might be fun to have Batman involved. This trilogy is like that, except about urban gang warfare or possibly the Soviet bloc. Buffy and Angel are about as poorly shoehorned into the plot here as Batman was in The Ultimate Evil. Credit where it’s due, though: regardless of how bad a fit Batman was in that story, at least the story itself made a lick of sense. This one, not so much.