Eventually, I liked the plot for Bitter Fruit. Cryogenically frozen bioterrorists first rebuild the Celtic empire[1] and then plot to wipe out most of the already dregs of humanity that yet remain, a hundred years past the nuclear holocaust that already basically marked the end of the world. Luckily, we know who can probably stop them! (Oh, this is a Deathlands book, if you didn’t actually know yet who could stop them.)

I say “eventually”. While this was not the first book in the series to have a new author, it was the first book where I noticed. Characters subtly out of character[2], a big change in the way book transitions work[3], and most damning, a possible change in the gender egalitarianism of the series. I’m reserving judgment on that last bit, as one data point is not a trendline, but all the same, none of the female characters have ever used sexuality to extricate themselves from danger before this author, so. (The main male character has at times tolerated sex while in danger, which I suppose is technically rape, and also I do not object to using sex as a tool in the toolbox when required. I’m just leery of it from a first time to the series author, after having spoken so much about the quality of the books to date.)

Worst news: this new author will be popping up frequently for a little while. Man I hope someone smacks him around and sets him straight.

[1] Well obviously empire is not the right word here. People isn’t what I want though, and kingdom is nearly as wrong as empire is, albeit a little less inadvertently snide.
[2] Just because you call a dude laconic, if he talks all the time and in much more detail than he used to, I’m both going to notice that and also judge you for not having known what laconic meant in the first place, nameless (unless I went to wikipedia and checked again) Deathlands farm writer!
[3] Instead of “end a book, pick up the next book immediately where the prior book just ended”, this was “end a book, skip forward by about three chapters of what I would have expected to read, but those three chapters wouldn’t make any sense at all if they’d been written, which I guess is why they had to be skipped, but since I noticed, you didn’t actually accomplish much.” 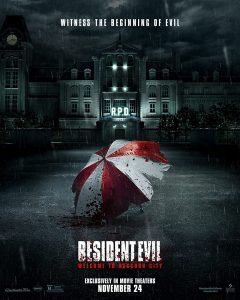 Speaking, as I was, of video game adaptations in general and the Resident Evil series of such in specific, it seems only natural that I would have remembered and thus watched the reboot. (But also I really need to finish Resident Evil 5, the video game. I’ve only been trying for years upon years.)

In a counterfactual world where a six movie series starring Milla Jovovich as Alice never existed, here is what I would have to say about Welcome to Raccoon City: It’s a pretty good mashup of Resident Evil and Resident Evil 2, the video games, which makes sense as those (and 0 and 3, not mashed up here) all cover approximately the same 72 hour period during which really a lot of things happened. There are a lot of iconic images and moments, and all in all it is a surprisingly faithful adaptation of those two games. The games are of course still better, but what else could you expect out of a game adaptation?

However, those movies do exist, and they exist as an object lesson in why, if you intend to adapt a game, you need to take the premise and go in a new direction, something that maybe surpasses or maybe doesn’t, but at the least tries to be different. With books, faithful can be amazing, but with games, you’re in control of what happens as you play, so faithful is a bit flat, you know? 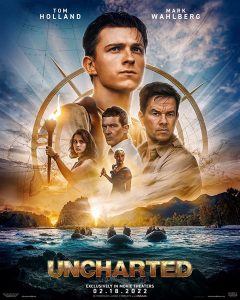 I really like the Uncharted game series; for a while, it was probably what kept me buying new Playstations, and you can see that they have not released one lately by my lack of a PS5.

So when they made a movie based on the series, and starring Peter Parker in the role of Nathan Drake, I naturally was skeptical, because video game movies are always bad. Always.[1] Also, for a variety of reasons it has been difficult for me to go to movie theaters of late. But Uncharted (the movie this time) landed on Netflix just a few months after release, unexpectedly, and here we are.

So, how was it? The thing about the Uncharted games is, most of gameplay is shooting (or maybe sneaking past, but it’s basically not possible) bad guys or navigating tombs and cliffs and things that involve narrow ledges and contorting jumps and indescribable upper body strength. All of the treasure hunting and decoding and knowledge and the like comes in dialogue while the game is being played or else in cutscenes. Which means that the series is in fact eminently suited to a movie adaptation.

And… they did alright, you know? It was weird seeing someone quite so young in the role[2], but all the treasures and legends and maps and weird secret keys and the like just work for me, you know? I watched National Treasure, for god’s sake, and this is maybe less over the top insane than that, but also more sincere, mostly on the (surprisingly buff!) shoulders of Tom Holland playing a young, not yet entirely jaded Drake. I had fun, and if there’s a sequel as the movie strongly, strongly implied there will be, I will make a point of watching it too. Maybe sooner, even.

[1] Not always.
[2] The movie character Nathan Drake was 25, whereas the game character has always coded as mid-30s to me. 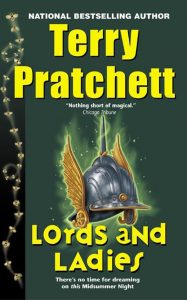 I haven’t read any Pratchett in a minute, which, okay, what else is new regarding literally anything else I also read? But nevermind that. I’m trying. Plus, there are so many comics I also read, which you don’t / can’t even know.

Lords and Ladies is another Discworld witches book, quite nearly back to back, and also following right upon the heels of Witches Abroad[1] insofar as this chronicles what happens when they return home. Which[2] is: a Shakespeare pastiche, where Magrat finds that she is to be made queen while the other two witches deal with the kinds of creatures that appear on midsummer night. You know, fairies. And as any Dresden fan knows, they ain’t to be trusted.

The book was moment to moment at the quality I expect from a Pratchett book, even at a 30 years remove as I seem to be. And the pastiche itself was dandy. But the book started off with this underlying implied theme about how people should talk to each other instead of keep each other in the dark, which after the Wheel of Time is a theme that is near and dear to my heart.

…but then at the end, they said, nah, this worked out fine without any of that pesky telling the truth and keeping our friends in the loop stuff, and that has left such a bad taste in my mouth that I’m retroactively meh on the book. 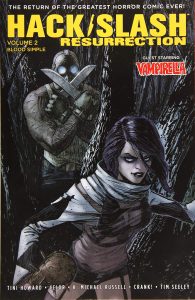 I appear once again to have come to the end of the adventures of one Cassandra Hack, Esquire and her associate, Vlad. I don’t know if this is the end or not, but I’m definitely happy that there was no attempt at a grandiose Ending. It just feels like the kind of series that should trail off. Maybe it can be picked up again someday and maybe not, but I like that the possibility exists, and that even if they never come back, she can still be wandering America, looking for more slashers to dispose of, and we’re just not hearing about it anymore.

Blood Simple, despite everything I’ve just said about endings and such, seems in retrospect (i.e. now that I know it’s the last book) to have concerned itself mostly with tying up loose ends. The first bookend to the set revisits Cat and Dog Investigations, consisting of a teen wunderkind and her demonic skinless dog-thing named Pooch, as they (and Cassie and Vlad) look into a haunted house at the behest of area psychics, followed by our heroes and Vampirella versus a vampire town that maybe I should have recognized from previous Hack/Slash tales when it wasn’t a vampire town yet, but I did not, and then the closing bookend is Cassie versus censorship.

All in all, the book was fine. I’ve read better (the first half of the original run, before it got too far up its own ass with convoluted continuity and too big bads) and worse (the recent Vampirella crossover, for example, which really was bad at these characters, but also I do not remember Son of Samhain fondly), and maybe someday I’ll read better or worse again.

But I don’t think I expect to.