To my very great surprise, my most recent book has been the opening entry in Martin’s A Song of Ice and Fire, A Game of Thrones. What with my dad so much out of it via his time in the hospital, we needed something to do while visiting. I eventually started reading the series to him, figuring that he’d like it and also that it would give me a chance to catch up in time (well, okay, not exactly, but sort of) for the most recent volume.

But, the unexpected part is where I finished it so quickly. In fact, it read fast, and the politicking is sufficiently pleasant that I didn’t very much mind the relative lack of frozen zombies. (They are, after all, both the point and the pay-off.) But I get ahead of myself. What we’ve got here is a story about the end of the world, not by fire but by ice. Specifically, the undead Others from the polar north are on the verge of emerging for the first time in 8000 years to destroy the world of men. Only, nobody in the world of men is particularly aware or concerned; after all, there is power to be won, and money, and most importantly, a crown.

Westeros is a brutal land, but also an honest one. All too rarely do people get what they deserve; instead, they get what they can grasp and hold onto with their own two hands, and the penalty for a reach which exceeds that grasp can be dire indeed. And so the question becomes, can the honorable old Stark family of the North, the gold- and power-hungry Lannisters, the last daughter of a usurped throne, and all the men of Westeros settle vast gulfs of difference before Winter has come?

Thematically, it shares a lot with Jordan’s series. The goal appears to be to demonstrate exactly how divided man can be from man, and still manage to pull together in time to save the world. He outpaces Jordan in that mistakes have real consequences to actual characters in the storyline, not merely to the faceless masses. Prosewise, his errors are less glaring but nearly as annoying as Jordan’s can be. Or maybe it’s my own peeve, but quite frequently I’ll see the same word twice in a sentence or consecutive ones. Repetitive word choice drives me crazy. On the whole, though, excellent start to a series that appears to be over halfway through right now, and that continues to show a great deal of promise. 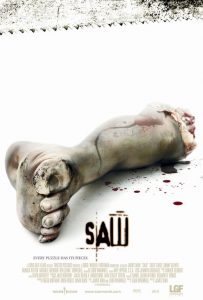 Having seen Saw II, I decided that it was time to… watch… Saw. And I have to say I liked it. I claimed a few weeks ago that a scene in the sequel ruined the original. As it happens, that was not true. So, I still got even to enjoy the ongoing plot as it unfolded, although it turned out there was a whole different issue where the reveal of the bad guy was a major plot element, and I already knew that part. Still, not so bad on the whole.

Saw is the tale of two men chained on opposite sides of the room, how they got there, and what they have to do to get out. (If you think a saw will be involved, you just might be surprised! But probably not.) As good as it was (and I’m willing to proclaim any future sequels must-see for horror fans; finally, some good footage is getting put in film cans instead of direct-to videos), it could have been an order of magnitude better if they’d managed to tell the same basic story and keep all of the action in that room. Tension, cat-and-mouseness, substantial gore, it was all there. Luckily, the outside scenes mostly involved Danny Glover, who seemed to know even if he didn’t admit it that he is definitely getting too old for this shit, so the remainder of the movie was pretty well saved too.

Big movie of the weekend, I hear, and yet mostly unpopular with the literary set of which I am aware. Yep, it’s November, which means it’s time for Harry Potter to go back to school. (Except for that time he went back to school in July. British people are weird; I think it’s because of all the fog.)

Note: Expect spoilers for the books below, as well as for previous movies. Well, and maybe for this movie, depending upon your perspective.

As the books get longer, the movies get longer; nevertheless, more and more of the books is disappearing. Harry faces the dangers of a magical tournament between Hogwarts and other wizarding schools around Europe while plagued by dreams of Voldemort’s return to power. Also: adolescence! Anyhow, it was pretty good for what it was. It kept the core plot elements, sacrificed a number of unnecessary elements (freedom for house elves, Percy is a prat, some guy is in hock to the goblins), and then sacrificed several wholly relevant plot elements (the second half of the Rita Skeeter plotline where the wizarding community loses its crush on the Boy Who Lived, Harry’s growing relationship with his uncle Sirius, a reasonable explanation of what happened in the climactic moment). But that’s okay in a way; as long as those elements are established solidly in the fifth movie when they would be coming to fruition, then it could still work out. Of course, that book is longer still than the current one, so it hardly seems fair to try to cram in info from an earlier book too. Luckily, this is not my problem.

In short? Decent movie, pretty to watch, and the edits are all the more painful for coming so near to being masterful and then falling short of it. I’m missing all the actual wizard-learning as well, but that is disappearing from the books too, so, y’know. Below the cut, my one big (and unmistakably spoilerish) complaint with the film adaptation.
END_OF_DOCUMENT_TOKEN_TO_BE_REPLACED 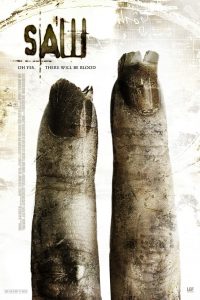 Having a father in the hospital makes for a dramatic slowdown in consumption. Only one movie in the past few weeks, and I do have at least a couple I wanna see right now. Only one book lately too, but part of that is my choice to read a doorstop novel so as not to have to do any other reviews for a little while. (Is it cheating to acknowledge stuff like that? Well, whatever.) But, lots of Harry Potter to while away my dad’s time, and let me tell you: that lady uses really a freaking lot of adverbs. Which is pleasant, as they’re very much like script directions, and I can be sure I’m getting the voices down solid. But still, I’d never noticed just how frequent it was, reading them quietly to myself. Just saying.

However, I was actually talking about movies, this time. I saw II…. um, no, that’s not right. Let’s try it again. Um. I went to see Saw II. But I didn’t see Saw, so how can you claim you did too? Look. Seriously. Shut up.

It makes me want to see Saw (I mean it. Shut up.) even more than I already wanted, even though through a probably inevitable turn of events, I know how Saw ends already from this current film. Leaving that aside… yeah, it’s pretty good. There are twists, as all good horror movies should have. Also, violence and brutality. The conceit (I think of both movies) is pretty simple. A homicidal sociopath (or possibly an ethically unfettered clinical psychologist) puts people in deadly situations but with all of the tools necessary to escape from them, and then watches to see what they’ll do. This one has two subplots, seven people (or eight? who can remember?) in a trapped house from the mold above, and meanwhile a cop whose son is in the first subplot has captured and is interrogating the maniac, in the hopes of rescuing everyone.

The main thing I took away from this is what a great RPG subplot #1 would be. You set the house, and the clues, and assign the characters to people, and then see if they’re able to save themselves before the deadly gas kills them all. Far better RPG than movie, and it was much better than the average slasher movie, which had very nearly fallen by the wayside anyhow. So, thanks for the cool idea which I may use someday, unnamed Hollywood scriptwriter(s), and also thanks for revitalizing stuff that was just lame direct-to-video anymore. I now have a new most anticipated movie to look forward to (well, not counting if Snakes on a Plane materializes), 2006’s Slither, starring Sheriff Mal Reynolds. 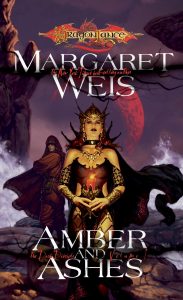 For a lot of people, the DragonLance series has not been a high point in their reading careers, and for still more, it’s been relegated to the dustbin of history since the late ’80s. But me, I’ve always had a soft spot for those original authors, and the characters and world they created. So I know the more recent history, with a great huge novel devoted to killing lots of people and taking away the gods and the moons and whatnot, and then another trilogy revealing that the cause behind the preceeding events was not what it seemed. Now, there is a new trilogy in which nature abhors a power vacuum, and so Miss Weis is going to see to it that it has been filled.

Unfortunately #1, all the old characters are completely out of the picture these days, excepting the newly returned gods of course. But since they’ve never really appeared as characters before (well, okay, but these ones haven’t), it’s hard to have a stake of familiarity involved. Unfortunately #2, the land is so different as to be unrecognizable, littered with elven refugees and a Solace on the verge of becoming the southern Palanthas. Unfortunately #3, vampiric cult. Seriously.

But it’s not all that bad, it’s just that I have mildly higher expectations, and they have not been met. As generic fantasy, it’s perfectly inoffensive, and in fact still more reliably written than a portion of what I read these days. (Ask me three years ago, and it’d be better than two-thirds of what I read, so.) Amber and Ashes tells the tale of Mina (disciple of the One God in the years when Krynn had none) coming to terms with the lie that has dominated her entire life and choosing what to do next with the new life that has been left to her. It’s also the story of that vampiric cult I mentioned (which is not quite as bad as it sounds), the gods setting a new pecking order after recent changes, and the pawns they are using: in this case, a monk, a kender who sees dead people, and a death knight. (Yes, the kender can see him.)