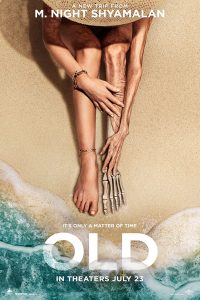 I think the last M. Night Shyamalan movie I saw was Devil? It’s been a minute, is all I’m saying. Now that everyone knows what his schtick is, his strength lies not in tricking you into thinking the movie you’re watching is a straightforward drama when actually there’s a twist, but in giving you the twist early and leaving you to figure out what’s going on, if you can. (The Servant on AppleTV is also doing this, but it’s a multi-season TV show, not a movie.)

Old is about some people on (Mexican? Caribbean? Central American?) vacation who go to an isolated beach for the afternoon, only to discover that they are all aging at a fantastic rate, and also (predictably) that they cannot leave. After a few introductory scenes in which people talk about the importance of living in the moment, seizing the day, all that, just in case the plot was a little too subtle too stand alone, we’re off to the exact races I mentioned. Why is this happening? How can it be stopped? And of course: how would you spend your last day on earth? (Although that one maybe is a little subtle and keeps getting lost in the breakneck speed of the plot.)

Shyamalan will never, I think, top his first two movies. But for the first time in a generation, he’s released something [which I’ve seen] that I can recommend without reservation. It’s probably not great, but then again I think he’s only ever had one great movie. But it’s thoughtful, occasionally frightening, and always engaging. …okay, always after a pretty slow introductory act in which basically nothing happens, but which was probably necessary to the plot making a lick of sense, and for that matter, necessary to the themes working. So I’ll allow it. 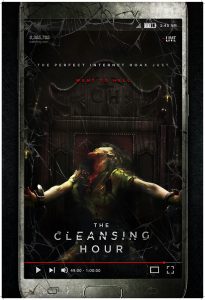 You know how found footage is a movie (mostly horror, but perhaps not entirely) subgenre? And you know how over the past two to three years, what with Covid, lots of movies are now filmed partially or entirely via Zoom calls or other internet streaming video connections? The Cleansing Hour isn’t exactly that kind of movie, but others I’ve watched over the past, well, two to three years have been, and this one got me wondering about what the new subgenre is called, if anything.

In addition to being the title of the movie, you see, The Cleansing Hour is also the name of a weekly exorcism livestream in which Father Max faces off against a new demon possessing a new person[1] every week. I guess they must bring each victim to the studio? I’m not sure that makes sense, but then again, it doesn’t have to, because it’s a staged show, with no real demons or for that matter priests involved.

I bet you see where this is going, but you know what? I say this is an excellent, juicy premise for a movie. What happens when a demon actually shows up, and now they all have to figure out what to do about it? And oh by the way, the livestream is already up and running, so no calling in the actual professionals when everyone can see you already. Good luck!

And then, this is the best part: the movie entirely delivers on the promise of that premise, up, down, and sideways. I have no complaints, and would unreservedly recommend this to anyone who likes exorcism flicks or has a grudge against things that are phony.

….although that last bit raises a question that went through my mind as I was watching. How weird must it be to make a definitionally fake exorcism movie about a demon who is pissed off about all the fake exorcism movies you’re making? I bet the pranks on that set were legendary.

[1] Hundreds of possessions cured! Thousands of demons defeated!, say the opening credits. I cannot make that math work, though. Like… how? 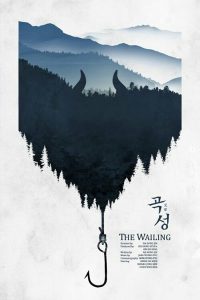 I’ll get the easy part out of the way. The Wailing is a supernatural mystery in which a lot of people in a small town are killing each other in zombiepocalypse-adjacent ways, but with no transmission of disease. Is the problem drugs? Mushrooms? Demons? Ghosts? Evil spirits? (Do Koreans distinguish between the latter three possibilities?) But then it turns personal when a local cop’s daughter is possessed by the same force. On the one hand, we never see the incubation period of the drugs-or-mushrooms-or-demons in any of the other murderous victims, so her slow deterioration might still be perfectly reasonable under any of those explanations, but on the other hand, she’s a little too young to have gotten mixed up in drugs or random forest mushrooms, probably.

The meat of the movie, though, is what I want to talk about, except it’s entirely spoilers, more than the arguably too many I’ve already provided, so I’ll go to a cut.

END_OF_DOCUMENT_TOKEN_TO_BE_REPLACED 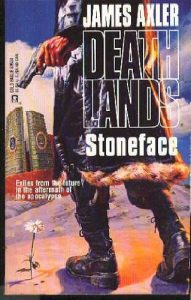 What do you say after 34 books in the same series?

I guess the first thing I’ll say is that I like how they’ve added some new villains and secondary characters that will maybe pop up again in the future, because it’s important not to get bogged down and run out of new ideas. (Plus, one of them has cool mutant powers like the main lady character, Krysty Wroth, and it’s nice to have positive mutations as more often than a one-off, since they sure don’t skimp on the negative mutations. Thermonuclear radioactivity, what are you gonna do? shrug emoji)

The second thing I’ll say is that even though it’s arguably lazy to set a book a hundred years in the future and then rely on the present as grist for your novel mill, I really do like when we get bigger glimpses into the way the world was when it ended, and this is a big one indeed. What would you say to a mountain full of pre-nuke government officials who have been keeping themselves alive with cryogenics and constant organ transplants? I, for one, can dig it. …and then there’s a suspiciously familiar cult, too. It’s an embarrassment of 20th Century riches, is what.

The third thing I’ll say is I have a disappointment, particularly because of how often I’ve been surprised by progressive egalitarianism throughout the series. When you call your book Stoneface, and it is partially set in and around Mount Rushmore, with characters[1] from the indigenous Lakota people, well, I was really hoping they would bring up the Six Grandfathers at all. But that’s a lot to ask of 1996’s authors, you know? In a lesser men’s adventure series, which let’s be honest is basically all of them on the “how progressive can this genre be?” scale, it would never have crossed my mind to be disappointed here.

Counterpoint, though, I really like to hope I would not have read 34 books deep into such an alternative series. Despite what it looks like, I do have standards. 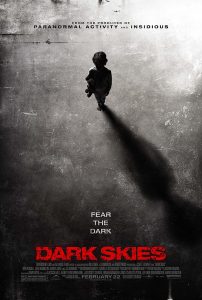 During the first maybe 10 minutes of Dark Skies, I thought I was watching someone’s take on E.T. as a horror movie, and man, I really want to see that now that I’ve thought of it.[1] But by the time I’d seen three different scenes of stuff in Keri Russell’s house stacked weirdly or moved around when nobody could possibly have done it and then her husband decided to install security cameras, I knew I was watching someone’s take on Paranormal Activity as an aliens movie instead, and for whatever reason, that’s not nearly as interesting of a premise.

It was fine, though, other than the teen drama bits, which seriously did not fit the tone of anything else going on. I think if you remove the neighbor teen love interest, you lose ten minutes of footage and change nothing at all about the movie. That’s never a good sign, you know?

Also: there were never any especially dark skies, so I guess it was a metaphor.

[1] …or make it? That would also be cool. I guess step one is a script, although realistically I shouldn’t let that stop me. Except, there’s a pretty strong case to be made that Stranger Things already partially did this, which will stop me, so, nevermind.