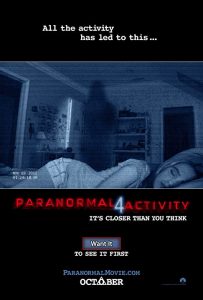 So, hey, I finally saw a movie! I still have at least three more I need to see, but just breaking the dry spell is a plus. You may recall there were two previous movies in this series as well as a prequel? Well, Paranormal Activity 4 is a sequel again, and… well, there are two ways to watch it. If you like cameras filming all the things and people refusing to take seriously what they are seeing and eventually scary jumpy things happen[1] and then suddenly everyone starts to die, and especially if you like seeing just how creepy Katie Featherston can be? (Answer, as you know if you’ve seen any of these: seriously damn creepy.) If that is what you are watching for, you will like it just dandy, and are welcome to have all kinds of fun.

If, on the other hand, you are watching it because of the compelling story that has played out across the three previous movies, you will be very sad. Yes, there is creepy Aunt Katie. Yes, this is still about demonic possession as it relates to Katie’s doomed and/or creepy extended family. But really it’s about what happens to a group of innocent bystanders, with only the barest of incremental additions to the overall mythology. Maybe there will be a fifth entry to the series? But, much like the end of the second movie, I still don’t see what would be gained by making a new sequel. Demon wants baby, demon got baby. What else really is there to say?

Well, one thing. The infinite number of infrared dots that a Kinect fills a dark room with? Perfect backdrop for, er, paranormal activity.

[1] Also, there was a basically great reference to The Shining. Not enough reason to watch the movie, but entirely giggle-worthy if you do so.

Yes, it really did take me this long to read The Fires of Heaven. (Yes, I really haven’t watched a movie in this long either.) No, it’s not because I suddenly liked the book a lot less than I have liked the previous ones during this re-read. Yes, it spells all-but-certain doom for my hopes of being caught up with the series by the time the last one comes out in three-ish months. Yes, that makes me pretty sad.

But damn, it doesn’t make me as sad as watching Moiraine’s noble-tragic march through the book, every bit as cognizant of the outcome as I am.[1]  It doesn’t make me as melancholy as the loss (in one way or another that is probably not as lossy as you might expect) of three characters I would like to have watched for longer than I got to.

The metaphor breaks here, because most of the rest of what I have to say is good. So much of what isn’t melancholy trending toward tragic is ridiculously awesome (Mat finding his place in the world, finally) or downright hilarious (any given scene from Nynaeve’s point of view, and I feel bad relegating her to the hilarious when there is so much awesomeness to be had by her along the way). Plus, this is the first book where we see into the minds of the bad guys in a sincere and meaningful way. Those sections have always been my favorites, I think, once they were not solely the province of Ishamael, the 4,000 year old lunatic.

If I have to pick a character to dislike (and save for Elaida, this is probably my first time in the read), it’s Egwene. Her rise to power is cool in its way, I like how much she is learning and how much she wants to learn, but the way she turned the balance of power on her friends solely to keep them from ratting her out for doing something she had sworn she would not do, and especially for her feeling so gleeful about being able to upset that balance of power for such an ignoble end? Pretty icky, Egwene. Just saying.

[1]I have read this book at least four times, and every one of them (well, okay, not the first one in 1994[2]) I have felt increasingly more sad over the course of her scenes and inevitably become teary by the time Rand is reading her letter.
[2] This was the first book in the series I had to wait to read. I did not have to wait long at all, maybe only a month or so? But I did have to wait.