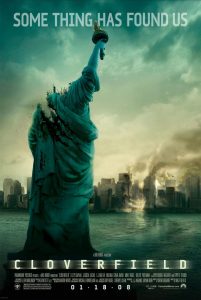 Then, earlier this week I saw Cloverfield, which will mean that I’m finally caught up. So that’s awesome. As for the awesomeness of the movie… well, it turns out it wasn’t really that kind of movie, and I think that’s what made it work so well. When you see Independence Day or Godzilla, to name a couple of other times New York has been destroyed, the focus of the film is on the people who are out there saving the day, and they’re big and heroic (or occasionally dorky and heroic) and the movie is about them saving the day. Cloverfield, contrariwise, is about us. Any of the regular people who, when New York starts falling apart around them, are basically fucked. And they know they are, but the thing about being human is you still do everything in your power to survive, even when there’s no hope. And sometimes there are still amazing feats and there are still small moments of heroism, and that’s okay because another thing about being human is that every so often you surpass your limits.

I’m going to leave plot out of it, I think, because except for that something is attacking New York and there’s a dude who has a video camera[1], you don’t really need to know anything else and it might take away from the impact. And, okay, there’s the Blair Witch comparison: sure enough, if you have motion-sickness problems, this will probably not be the movie for you. People have to run a lot, which makes for shaky camerawork. But if you can get past that, the rest of the film is equal parts cool / scary things happening amid explosions and gripping human drama, or occasionally melodrama. But let’s be honest, that’s just as real a part of the human experience as the rest of it. Plus it subscribes to the first rule of drive-in cinema: anyone can die, at any moment.[2]

[1] And pretty much everyone who has seen a movie preview somewhere in the past six months knows this much already.
[2] There are just so very many reasons I liked this movie.

The local friend with whom I’ve been reading graphic novels in tandem got a bit backed up toward the end of the year, to the point where even though I read Cryptonomicon, he was still behind. (I know, right?!) So I took the opportunity to grab something on the comic shelf that I know for a fact he has no interest in, the first Buffy comic collection. I mean, not the Season 8 thing that’s out right now; those are unfortunately unreviewed because I’ve been getting them one at a time and haven’t bothered with the collected version[s] yet. This is instead a series that was running concurrently with the show, back when I was far less comic-inclined. And even then, I doubt I’d have bothered; the purchase was definitely inspired by the Season 8 run. Anyway.

It was… not exactly what I expected, but pretty good! After a brief digression in which Spike saves the world from Cthulhu in the 1930s, the rest of the (out-of-publication, in-story-chronology order) book covers Buffy’s first days as Slayer, from a non-camp version of the movie through her next few months between burning down the gym and moving to Sunnydale. I have fonder memories of the movie that most Buffy fans, apparently, because the only piece of camp I noticed missing was that Paul Reuben’s vampire was actually a lieutenant vampire instead of a giant dork; the rest pretty much reminded me of exactly what I saw on screen, although admittedly it’s been a while.

The remaining stories explain the disappearance of Pike as well as Buffy’s experience with mental health professionals in the wake of her parents first learning about (and ultimately dismissing as fictional, of course) her new duties. Both felt very much like episodes of the series, which gives me hope that I’ll enjoy future volumes. The one odd spot was the presence of Dawn; of course Buffy would remember her presence, and I have no real complaint anyway because she was quite well done and enjoyable, but the story that had Dawn without Buffy required some mental gymnastics to accept. I know she remembers her life too, and that things related to Buffy would have impacted her. Really, it was no worse than any time travel fiction; it was just an odd choice. But, I reiterate, ultimately a good one!

The art, um, well, pretty much everything else I read is superior. But I’m pretty confident there are a large number of things I don’t read that are still worse, so there’s that? 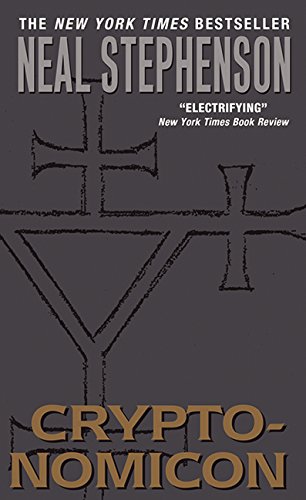 This review is somewhere between days and weeks late; I just haven’t simultaneously felt like writing anything and had time to. I’m not entirely clear on whether that confluence of events has in fact occurred now, but I pretty much have to get over the hump, right? The sad part is, I absolutely adored Cryptonomicon. I mean, I’ve heard of Neal Stephenson and Snow Crash years since, but I never got around to reading it because I could never get into Gibson, and that made me think I wasn’t into cyberpunk. The jury is out on that question, I guess, as to my way of thinking Cryptonomicon doesn’t really qualify as cyberpunk, at least not the way I understand it.

That said, I’m not really sure how to classify it, except to say that the lone Half-Price Books I found that had shelved most of Stephenson’s books under general fiction instead of sci-fi/fantasy was clearly the correct one. It’s a book about cryptography from the early days of World War II up through modern times, where modern works out to mid ’90s, and a book about the unexpected interrelationships between a couple of families during the same span. The viewpoint characters are all either endearing or at least interesting, as are a majority of the remaining characters. The villains of the piece are not so much written ham-handedly as we are given almost no insight into their motivations at all. In a way that’s a complaint, but for the most part the book wasn’t really about bad guys, so it’s not much of one. Along with the story, which is engagingly written in exceptionally good prose, Stephenson spends a lot of time explaining about advanced mathematical concepts (well, not actually advanced, but advanced for the vast teeming majority of people who will read the book), statistics, cryptography, and the internet. While the internet is pretty much my field, most of the remaining topics are not. I therefore feel that I’m sufficiently lay of a person on those other topics to say he does a good job of explaining every point he’s trying to get across in such a way that a layperson can follow it pretty easily. Which is the kind of thing I mean when I say it’s not really cyberpunk. It’s in no way so dense that you have to know a pile of things to even wade through it, and anyway the setting is neither futuristic nor dystopian, even though there are hints of that potential for the future. Since those hints also exist in real life, I don’t think that counts as very cyberpunkish either.

And I continue to have trouble classifying it, despite odds and ends of thumbnail sketching I’ve already done. There’s World War II, of course. Lots of philosophy. A treasure hunt. Future directions that the internet can and probably should take, if it hopes to remain the repository of free information that it is now for most people around the world. More than one love story. A compelling view of undiagnosed mental disorders in people who, through luck and circumstance, end up being more or less functional in the world. A completely incomprehensible (in more than one way) island of people off the coast of Britain. Counter-counter-spying techniques. There’s just a pile of things going on, is what I’m saying. As there should be, with over 1100 paperback pages.

Mostly, though, I’m a little annoyed that nobody insisted I read this sooner, ’cause, wow.