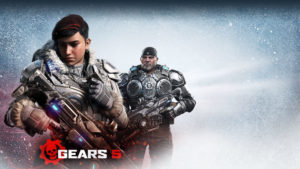 Back at the dawn of time, I played Gears of War. Later, I started to play Gears of War 2 and got maybe two chapters in, and then… never touched the series again, except in multiplayer. Even though I liked it! They were good games! But I did a thing I maybe do with frequency (in games especially), and let the perfect be the enemy of the good. Because these are two player games, and they are explicitly different in two player at times, so you feel like more is going on if you get the full experience, and since I was not at that time getting said full experience… well, here we are.

Fast forward fourteen[1] years, and I have now played Gears 5, which for one thing is no longer “of War” apparently, and for another thing is the second(!!) entry in a new trilogy, the original Gearsing having apparently been completed with volume 3 until they decided they could make more money, and for a third thing is now a three player game.

I know you’re asking. “Well how do you have three players to play a game with when you haven’t had two for over a decade?”, and that’s a fair question. But this new Game Pass dealie has drawn people out of the woodwork, is what. The important part is, I did have three players, and the game seriously uses them to good effect! Because one character is something something that’s a spoiler for this game and probably way more of a spoiler for volume 4 which I have not played, and one player is a hoverbot with a lot of cool non-gun-based powers, and one player drives sail skiffs, and together you wander around doing the kinds of things people expect out of War Gears, which is mostly fighting indigenous underground aliens. But now with occasional open world exercises instead of non-stop rails.

Long story short, it’s pretty cool still, and except for being allergic to third-person shooters or characters who have necks the size of an average American’s waist, there’s basically nothing not to like here.