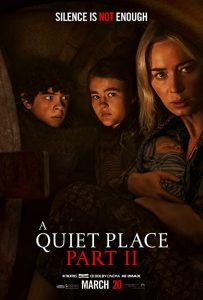 I have it on good authority that the best way to make a horror movie sequel is to make the same movie again. cf Evil Dead II, or Halloween II[1], or Friday the 13th Part 3: 3-D, to name a few. I mean, this only works with good horror movies, but it’s okay: I liked A Quiet Place.

But in all sincerity, A Quiet Place Part II really is the same movie, and not only because (a la the aforementioned Halloween II) it starts on the same day that the other one ended. See, part one was about personal growth and overcoming tragedy and unstoppable killing machines. Whereas part two is about personal growth and overcoming tragedy and mostly unstoppable killing machines. And also one more roadblock, but, you know: spoilers.

The larger world beyond just a family trying to survive was, for me, a detraction. The action set-piece prologue could have been as well, but I like a good backstory, you know? And I fundamentally like a movie that isn’t afraid to divest itself of dialogue and sound effects and for that matter soundtrack, and just try to be quiet. The original was better, but Krasinski’s heart is for sure in the right place here.

Oh, also! I saw a movie! In a theater! For the first time in over a year! Holy shit.

[1] The original, not the remake. The remake, unlike the remake of Halloween, is hot garbage.