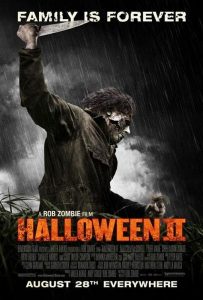 This right here is a difficult review. Because I’ve just reviewed a movie that, however barely serviceable its plot, understands the way horror sequels work. Because John Carpenter’s Halloween II is the best horror sequel ever made. Because I enjoyed both Rob Zombie’s remake of John Carpenter’s original Halloween and his other movies that I’ve seen. Because it will pretty much require a non-stop spoiler parade to really explain myself. But mostly because, despite a deep inner craving to love Rob Zombie’s Halloween II, I kind of hated it. So, that’s the short version review. The longer one[1] includes, as stated, dangerously high spoiler levels.

[1] Everything below this footnote, basically

After a quick homage to the hospital setting of the 1981 original, the movie diverges starkly into Zombie’s own vision in a way that his first remake never did. The less-supernatural Michael Myers has nevertheless somehow survived the events of the first film, and after a year biding his time, he is making his way back to Haddonfield to visit his sister once more. Meanwhile, Dr. Loomis has written a new book documenting the events of the previous Halloween and Michael’s motivations (such as they were); naturally, such a story would be incomplete without revealing Loomis’ knowledge of Laurie Strode’s true parentage. And yet again meanwhile, Laurie, her best friend Annie Brackett, and Annie’s father the Sheriff of Haddonfield are simply trying to move past the horrific events of the previous year, unsuspecting of the brutal physical and emotional shocks that this Halloween will bring.

And even though that is not a clone of Carpenter’s script, it could work really well. Except… everything was slightly wrong. Michael Myers is declared dead at the scene, and then to all appearances simply comes back to life after the the coroner’s car hits a cow. Blood sacrifice and now he is supernatural? All a part of Laurie’s introductory nightmare, and we don’t know how he ended up staying alive? It doesn’t quite fit the previous movie, which is a refrain I could repeat all throughout this. He and Laurie start having somewhat shared visions that for his part mostly include visions of his mother and younger self encouraging him to retrieve his sister again, and for Laurie’s part a focus on violence from Michael’s youth. Which, again… where would the supernatural element have come from, after the first movie was played so straightly? His visions could be explained as ongoing insanity, but not hers of a largely true past, nor her later shared visions in which she sees their mother as well. Plus, their mother was behaving wholly out of character from the previous movie. Which would be fine if it had only been Michael’s delusion, but…

And the fact is, I could write on for paragraphs on this same theme, where the movie kept being strange and confusing and not working. Even worse, I can see a movie underneath the one on film that could have worked brilliantly, wherein Michael Myers really has been dead for the past year, and everything that happened this time around was a result of Laurie Strode’s fragile mental state in the wake of the trauma combined with genetic propensity and the heart-breaking revelation that she’s HIS sister.

And that’s what’s hardest. Seeing a sequel not work, that happens all the time. Seeing a sequel that could easily have worked fantastically and instead falls so short and ends so inexplicably out of the character of its originator? That is just a lot worse. I guess, no surprise, disappointment is worse than badness on it own. Anyhow, I’m totally willing to elaborate on ways to fix the film, it would just take someone who had seen it to discuss with, and, well, I can’t exactly recommend that, can I?