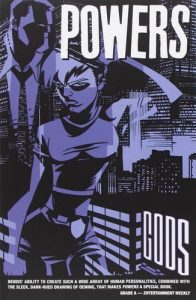 This is the last book in the Powers series!

Okay, it actually isn’t, but at the same time, if you’re going to figure out a way to wrap up the apparently third run of your series before rebranding it as something slightly different, and your series started out as “What if cops had to investigate when superheroes get murdered, and also what if one of those cops used to be a superhero but lost his powers?”, then it stands to reason that you have to end bigger.

Bigger, in this case, is solving the murder of a god, Damocles. Which… okay, it felt a little cheap, and here’s why. If you’re going to have had Greek (in this case) gods hanging out throughout the history of the series, there in the background all along, then you can’t wait to mention it until one of them is going to be your plot device. You especially cannot have your commentary track TV show that everyone (or possibly no one) watches, Powers That Be, talk about said gods and whether people believe in them as gods or as fancier heroes or not at all, like it’s a whole big theological issue, and also never have mentioned them in the previous thirteen volumes of your ongoing series. It’s a problem!

BUT: if you can ignore all that, which I was able to do until the composition of this missive you see before you, they act as a good plot device to reveal a lot of closely held character secrets and catapult the series into its next phase, which I will no doubt discuss next time, whenever that may be.