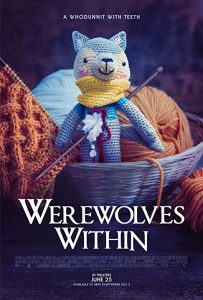 It seems that sometime in the past five years (because it can hardly have been earlier under the circumstances, now could it?), someone made a VR game on that general topic which I had never previously heard of called Werewolves Within. Which explains why Ubisoft was one of the production studios for the movie of the same name, and also explains why this ranks highly in the annals of video game movies: because it came by it unfairly, is why.

If you have ever played the game, you know everything you need to know already, but if you haven’t: imagine a small Alaskan town in the middle of nowhere[1], with a cast of characters including the methhead couple, the heavily armed Republican couple, the wealthy gay couple who just moved from the city, the lady who runs the bed and breakfast, the unscrupulous oil man, the famed environmentalist, and the creepy loner[2]. Plus our main characters, the newly assigned forest ranger (who has mostly been a voice actor in previous roles) and the postal carrier (who has mostly previously been the AT&T ad lady).

So, some of them are “villagers”, at least one of them is a werewolf, one of them is more or less a “seer”, and we get to enjoy a couple of days of comedic mayhem as the players sort each other out.

[1] We are Redundancy R Us
[2] I actually think I covered everyone, but don’t hold me to it.