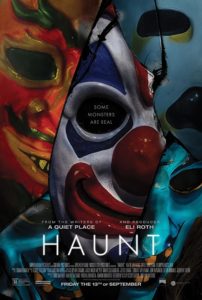 Sometimes horror movies are thoughtful and disturbing explorations of the darkness our collective psyche can contain; other times they’re gory morality tales about the dangers of behaving like a teenager. But also sometimes, they’re nothing more than a skeleton-thin premise around which to hang 90 minutes of growing discomfort and torture for no reason whatsoever.

Haunt is Hostel, except if the people who like to torture and eventually murder continent- and bar-hopping college student types decided that kidnapping them first was too much trouble, so they set up a haunted house experience instead. Sure, the upfront work is maybe a lot, but at least the victims walk in the front door and pay you for the privilege.

Pros: slow burn on the tension meter, with things not really going pear-shaped until the last third of the movie. Very creepy masks. Zero indication of why the bad guys are doing what they’re doing. (You can say that doesn’t go in the pro column, but I like the elemental force of nature killers that just happen to other people more, on average, than I like the ones with a real backstory.)