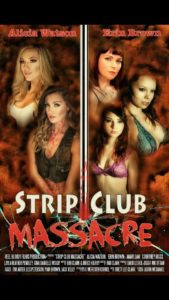 It’s not that it was badly shot, although it was. It’s not that the sound editing was abysmal, which it also was. (Actually, the sound editing might have been the worst part after all, but I’ll pretend like it isn’t to get to the next sentence.) It’s that it didn’t know what it wanted to be. From what odds and ends of the dialogue I could actually hear, it started as the story of a twenty-something woman fallen on economic and relationship hard times who finds herself a cocktail waitress at a strip club, watching the dancers make all the money she wants to be making. Then in the middle third it pivots to terrible people doing terrible things for no discernible reason except to show how terrible they are, even though in any rational world they wouldn’t get away with the terrible things they had done. Then, there’s like 20 minutes of events justifying revenge, followed by revenge.

The good news here is, it’s not the worst movie I’ve ever seen.