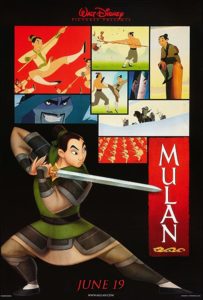 Upon request, I have also watched OD[1] Mulan, and I have thoughts. Sort of.

One thing I think is that I’m missing a lot of context. Not only did I just watch the live-action remake, but I also live in a post-Frozen world, where Disney is going out of their way to be empowering, or at least egalitarian, in their gender politics. So Mulan marching off to war to [spoilers upcoming for a 20+ year old movie] become a war hero who at no point needs anyone to rescue her is pretty groundbreaking for a Disney who started off with main character “princesses” who never even took actions, much less actions to improve their own lives. My point is, context matters and this was probably a bigger deal of a movie in 1998 than it seems to me now. Which is good! I would be much less happy if it felt groundbreaking today.

Another thing I thing is, man, Disney musicals are hit or miss. And this one, musically? Mostly missed for me. Some of the songs were really bad, and almost none of them made any lasting impact on me. The two that rose above that included one that was also cringeworthy. I mean, it was supposed to be, but that didn’t really help? Oh well. That said, the further into the story I got, the fewer songs there were. So that part was helpful!

Lastly, I have comparative thoughts, which are these: I’m really grateful to this movie for existing, because the remake took every good thing about the original, processed and refined it into something that was purely better. The problems I had with the live-action version were directly a result of the movie feeling like a real historical document, as opposed to the animated Disney version of a folk legend. In folk legends, you can believe in people doing the right thing, just because it’s right. It’s harder in real life, and my point is, the remake felt real. I’m not sure Disney could have pulled that off without their own template to pull from. It’s not just “What if one of our old movies, but live action?” that Beauty and the Beast was. It really is its own new thing.

As for this? It’s alright, you know? And I like it when Ming-Na Wen is a badass, even if I can only hear her.