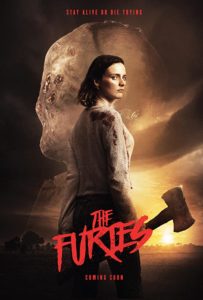 On the bright side, I rather liked The Furies. The trick is, you have to give it fifteen or twenty minutes, because it starts off pretending to be a different movie than it ultimately is. See, there are a bunch of girls in boxes in a creepy eucalyptus (probably) forest, and once they get out of the boxes they’re being hunted by hulking brutes in creepy[2] masks. Which is to say, generic torture-adjacent but full-on misogyny horror. And it’s okay to not want to get past the first fifteen or twenty minutes based on that opening, because believe me, I get it.

But if you did, it quickly turns into a weird puzzlebox mystery with enough answers for both a satisfying conclusion and hooks for a very different, revenge-oriented sequel. Which I doubt will get made, but I’d probably watch if it did. Because I actually want to know more about what was going on.

[1] Although I’m writing this while I’m working, so arguably right now my excuses are sub par.
[2] Not as creepy as the last creepy masks movie, for calibration purposes