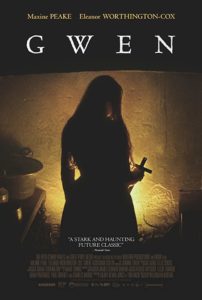 So there’s this movie called Gwen, in which Gwen and her sister and her mother, and also her father (in flashbacks mostly), wander around the hills of 1850s Wales, either being happy when they’re all together or moody and atmospheric and brooding when they aren’t. Also, some other things happened?

The sad part is, I’m not even joking. I watched this movie a day or two ago[1] and kept trying to pay attention to it, but realized at the end that I legitimately had no idea what had happened, outside of my description above and one or two specific events untethered from any ongoing narrative, like, oh, those neighbors died of cholera, or, huh, all the sheep are dead.

So instead of writing a probably unfairly empty review saying that, I watched it again this afternoon. This time, I felt like I really had watched the whole thing, and I for sure picked up a lot more. Is it all a land grab? Is the mother crazy? Or possessed? Is there a mysterious third party causing all these problems? Like, there was nearly enough plot there to mix in with the moody atmosphere[2], but then I watched the climax of the movie, and, uh… what?

So I went and found the Wikipedia summary of the movie, and sure enough, I missed nothing at all. The stuff that happened is just the stuff that happened. Which is to say there’s a subplot I did not mention above because it did not seem to be the main driving force of the film, but then haha surprise I guess it was.

I think I’m trying to talk myself into having hated the movie, which I did not do. I’m not even unhappy I watched it twice. But it is for certain not the movie that I wish it had been. Because what I understand this to be is a tripod of beautiful and unsettling and prosaic.

[1] I don’t even know which. Time, man.
[2] Folk horror, they’re calling it. The Witch is another such example, and at least there I understand why that appellation applies? This was also a limited cast, moody photography, and minimal dialogue, but I’m not sure that makes it “folk”, in the sense of folk tales I had previously assumed.