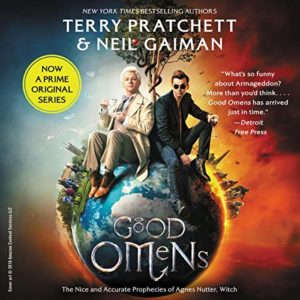 I first read Good Omens while I was in college, I reckon, based on recommendation and the brand recognition of one Terry Pratchett. So, years before I’d read Sandman or otherwise knew anything about one Neil Gaiman. Finding it now, of course, I would be ecstatic about the collaboration between two such giants, with possibly Gaiman tilting the scale even more?

Anyway, though, I think I only read it the once, which is to say 25 years ago[1], so once I recently learned there was a television adaptation, well. I think I saw all of the first episode rather than part? But for sure no more than that before I acknowledged that I would probably get more out of the show with familiarity, and anyway I had recently finished my current Malazan listen and was in the middle of a Hobb trilogy, which made it impossible to read the next physical book in the Malazan world anytime soon, so hey, time to switch audiobooks to something immediately useful!

Because, you see, a bit over halfway through this fairly short book (12 and a half hours), I no longer had a daily commute. Or much reason to drive literally anywhere at all, but especially in the car by myself. (Good god, my podcasting queue has swelled.) This is probably the least meaningful side-effect of Covid (to me personally I mean, much less to you who reads these words), but it doesn’t stop it being annoying.

But all that to say, I finished the damn book finally, and I do have a handful of scattered thoughts:

Anyway, it’s a good to occasionally great book, even thirty years after publication, and I’m pretty excited to watch the adaptation now. Six episodes, which seems like plenty enough? We’ll see! …well, I will anyway. It’s not like I’ll eventually report back or anything.

[1] goddammit
[2] This is not a shot at Pratchett’s plotting, nor is the other a shot at Gaiman’s humor. It’s just that it does feel like a Gaiman-style plot overall, and also he does not focus on things being specifically funny, in the general sense.