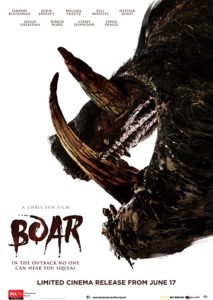 Australia: home of drop bears, kangaroos that, if they get tired of beating you in boxing, can just eviscerate you, snakes that you die after a handful of steps trying to walk away from, rabbits the size of volkswagens, spiders that I can’t even, and now a boar the size of a Sherman tank. Plan a visit, we have lovely brochures and you will only spend a third of your vacation time in transit!

The only real problem with Boar is that (and here I am speculating as to the cause) the director’s family was too dang large. Because there are like four to six groups of characters running around doing things while this boar stalks them, and any time you start to feel connection to the characters, the scene changes away from them for twenty minutes, and then once they finally come back to start getting killed off, you’ve forgotten why you care.

I think the boar may have been the hero of this movie, and I just missed it until now?

But seriously, a slightly leaner movie with half the size of the cast and the remaining characters spending more time getting developed and/or running away would have been perhaps brilliant. Plus, they had the guy from Wolf Creek who I now assume is just cast in all Australian horror by default, because why wouldn’t he be, and an enormous giant of a man whose last name is probably Ayers, since I would describe him as the Australian Rock. (I briefly thought he might be the hero of the film, but then he betrayed me by playing and singing along to “Ice Ice Baby”.)