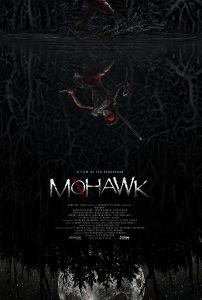 I saw Mohawk close on a week ago, but what with the falling trees, collapsing fences, narrowly averted gas explosions, recurrent gut infections, work overflows, and hospital visits, I just haven’t really made the appropriate time to think about it yet, much less talk about it. Today, though, today just may be that day!

This movie feels like someone’s passion project, someone who is a lot more steeped in Mohawk[1] and to a lesser extent early American history than I am. This is perhaps what I get for never having finished Assassin’s Creed 3. So, while the movie was interested in a snapshot of the Mohawk nation in decline, and perhaps in their myths and magicks of that period, what I found most compelling was watching a wartime movie in which the Americans are the bad guys, even though, perversely, they are not the aggressors.[2]

Recommended for fans of I Spit on Your Grave if only it wasn’t about that, people who think maybe a balanced view of history should have Americans as bad guys a little more often, and people who are into nihilistic futility.

[1] I suppose this is where I should have already introduced the movie by plot. Some members of a Mohawk settlement and a British agitator, during the War of 1812, face off against revenge-bent Americans after an offscreen raid and burning of an American fort, somewhere near Mohawk territory, which, to be honest, I don’t know where that is/was, exactly. Probably upstate New York?, after some unrelated research.
[2] Blah blah blah, but what I mean is, they are not the aggressors as shown in this snapshot 24 or so hour period.

There was a time when I said about the book of the same name that its premise, while potentially pointlessly silly, was not required to be so. Having gotten that out of the way, I must acknowledge that it is certainly possible to go the pointlessly silly route instead.

Except that’s not entirely fair. Abraham Lincoln: Vampire Hunter was incredibly silly, don’t get me wrong. It was, in fact, exactly what you would expect from the title, drawing elements from as many as many genres as its name implies, and when you are crossing a biopic with a balls out action movie with a period horror, things are just naturally bound to get a little bit messy in the tone department at least, and probably in the continuity department as well. But that’s my point, I guess, is that while it was a far sillier enterprise than the book, it still took itself seriously and told a coherent story, and y’know, I can’t find anything pointless in that.

Plus, it was just stupidly awesome. I believe it is fair to say that if, in any given scene, you are going to ask if they went over the top, my answer is that you cannot actually see the top from where they were filming, because of how very far below there the top was. …still, it was no Jesus Christ Vampire Hunter.

(No, I kid. It was so very much better. If you were comparing them, the conclusion that AL:VH is a legitimately good movie in context would be inescapable.)

Did you ever see that movie where the spy has a moment of clarity and retires before the job destroys his soul, but then someone (probably his girlfriend, but someone) gets kidnapped to use as leverage against him, so he’s sent off to do one last job, and it’s not a job he wants to do, but dammit, he’s a professional, and anyway, there’s someone counting on him to succeed. Killer Elite is that movie, except the spy is a British Jason Statham[1], there are more antagonists than just the kidnapper[2], and the someone is Robert De Niro instead of a girlfriend. So, you know, if you like that movie, this is a perfectly viable version of it.

[1] Odds are excellent that he is in fact British all the time, not only at this moment. Who can ever know for sure?
[2] Actually, this is a pretty meaningful distinction, and is the main thing that keeps the movie from being one you’ve seen multiple exact copies of before. So, yay that!

Last night, I learned something obvious about the new digital projector systems that are gradually being rolled out to every screen in America, signalling the death of spools of film stacked man-high in old Hollywood basements and an inability for my children to understand what’s going on during the climactic scene of Inglourious Basterds; if my life had taken a small enough turn somewhere in the past 15 years or so, I would mourn this far more than already I do, but luckily I only collect books, not spools of film. So, the obvious thing I learned about digital projectors, though? It’s that they can crash. Also that, less obviously, their crash screen is colored digital snow. And then you suddenly get free passes to the theater! So in many ways, the downside was not so much of a much, but I can imagine it happening in a fuller theater, for a newer movie, and actually during the movie instead of at the end of the last trailer, and man, that would be a pretty miserable day for the theater. It’s not like film projectors don’t run into their own problems or anything, I can just tell I’m living in the modern era when my movie had to be rebooted.

I will not make a clever “speaking of reboots” segue here, because the thing about Robin Hood is that it’s always a reboot. It might be on TV sometimes, and they make movies every so often, but each iteration is distinct. It’s just, this one was more distinct than usual. That said, it was a pretty interesting take. Basically, the story is written for maximum veritas, the kind of story you might have heard peasants telling their children before memory became the legend we know today. This accounts well for some of the oddities of the story, such as why a land-owning noble would have been an archer instead of a knight. Within these historical-minded confines is a pretty decent story of political betrayal, war, and romance. Just be aware that at some point there’s going to be a pre-enactment of D-Day performed with longbows. As long as you can swallow that, the rest of the movie should be just fine.

Also, if you are unfamiliar with the basic Robin Hood story such that you needed a more plot-minded review: really? I mean, really? I went to a lot of movies this weekend. Well, three, but three is kind of a lot, I think. One was Children of Men again, and I liked it every bit as much the second time. Another was The Hitcher, which I’ll discuss later. The first one, though, was The Good Shepherd, Robert De Niro’s largely failed Oscar-bait story of the founding of the CIA. I’ve been busy with things as well as stuff, but I also have been trying to let the film marinate in my brain juices so I could figure out what to say about it. It’s three and a half days later, and I’m still really not there yet.

Was the acting good? Yes. Did I like it? I did. Am I trying to fill up an entire paragraph with a Rumsfeld impersonation? I’m pretty sure he was never in the CIA, so that wouldn’t fit the theme; therefore, I will lie and say no. Was the movie too long? Maybe, but it’s a pretty dense subject. I think it comes down to whether you’re extremely interested in that subject, or to whether you care about CIA guy Edward Wilson’s experiences and the effect his devotion to the job had on his family, and the effect his family had on his devotion to the job. Because there’s a really good character study on the question of where cause ends and effect begins hidden in that script, behind layers of Bays of Pigs and deaf girls inexplicably going out for nights at the opera and in-depth studies of Skull and Bones, “the most secret society in America”. For the record, it does a much better job of portraying the character study than of exploring the early CIA, so if you’re after the latter, it probably is too long, after all.