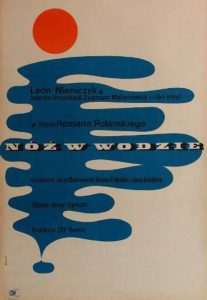 As you have perhaps guessed by the title, Mary and I finally watched another movie in the so-called “weekly” letterboxd dot com challenge, about which I’ve said more than enough previously. This, the seventh in the sequence and representing the beginning of November[1], was Polish Film School[2] week. I had (of course) already seen most of these, but the first film by newcomer Roman Polanski caught my eye, and we decided to give it a whirl.[3]

Knife in the Water is the beautifully shot story of a middle-aged married couple who pick up a young hitchhiker and invite him on their overnight sailboat trip, while all three constantly pick at each other. Also, the hitchhiker has a fancy(?) knife.

Okay, that was a little dismissive. It’s a three-person character study of clashing personalities in tight spaces, even though the cinematography is ironically full of open skies and broad vistas most of the time. It’s not clear why the husband dislikes the hitchhiker so much, their initial encounter notwithstanding, and it’s even less clear why he invited the youth onto the boat, nor yet why the hitchhiker accepted. Nevertheless, the premise leads to simmering emotional and eventually physical tension that both promise to boil over before the credits… well, okay, it’s 1962 and end credits weren’t a thing yet. Allow me to correct myself to “promise to boil over before the screen fades to black.”

Was it good? I believe it was. Was it in fact the first Roman Polanski movie I’ve ever seen? It was not, but only because of Rosemary’s Baby a short while back. …which, come to think of it, shares this movie’s paradoxical claustrophobia.

[1] sigh
[2] Polish Film Movement might have been more explanatory, week title deciders
[3] To translate, I was able to find exactly one of the movie options on a streaming service I have access to, and it happened to have name recognition as a bonus.