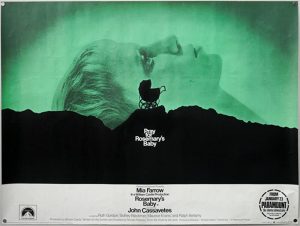 So we’ve, uh, fallen behind on this movie you’ve never seen that matches a theme each week website challenge thing. Week six, where last we left off in October, was something from their top 250 horror films, as rated by site users I guess? Anyway, I had seen the top five, and six and seven weren’t available for streaming, but number eight was Rosemary’s Baby, one of those classics where you more or less already know what happens because of cultural osmosis of so many subsequent references and homages, but you never know what’s actually going to happen, you know?

The jam is this: Rosemary and her financially successful but critically failed actor husband move into an old apartment building in Manhattan, one of those places where you already cannot believe how enormous the place is[1] even before you learn that it was at some point in the [recent?] past split in half from the apartment currently housing the elderly and somewhat kooky childless neighbors. Also, they (Rosemary and her husband) want to have kids.

The thing is, you know what’s going to happen next. I knew what was going to happen next. Everyone knows! My daughter knows, and she was born this year. It’s like Rosebud, you just… know. But at the same time, it was fun to pretend I didn’t know how it was going to turn out.[2] The things I found out along the way were things I didn’t know, but probably should have.[3] And at least one thing I found out but probably shouldn’t have known, which is I’m guessing this may be the first movie that did the trope where you solve the anagram that clues you in about whatever evil thing is going on by digging out a copy of Scrabble and just fiddling with the tiles. So add that to the list of countless tropes this movie has generated.

All in all: it’s very definitely a snapshot of a different time, but it’s mostly timeless, and also it’s mostly or entirely good. I understand why it is the eighth most well-regarded horror movie on this one movie website, is what I’m saying. Solid acting, solid script, solid atmosphere, exquisite final ten minutes. Would watch for the first time all over again.

[1] But at least it’s not like Friends where, how do they afford this? Because of the financially successful acting career and all, although also one of the Friends apartments would fit in the living room of this place, so
[2] And okay, I didn’t, not exactly.
[3] The next footnote is spoilers about things I found out.[4] So don’t read it if you care about spoilers for a 55 year old movie.
[4] Like, I didn’t know she had the world’s worst husband, who among other many sub-par qualities had as his go-to excuse for something that was, uh, pretty bad, his go-to excuse for it was “I went ahead and had sex with you even though you had passed out [after eating a drugged dessert that I insisted you eat because I knew it was drugged].” (Like, he didn’t spousal rape her, but he claimed he did, because the alternative was worse. …although I guess they don’t sound as close together in badness in 1968 as they do now? But credit where it’s due, even in 1968 she was all “that wasn’t cool, bro” about it before shrugging and giving up instead of not being concerned in the first place, like I expected in the moment. And I didn’t know, but absolutely should have, that when she went to a medical professional for help, he would immediately betray her. And I didn’t know that the relationship with her husband would play as so loveless and mechanical, which I at least believe was on purpose? There are things in the last scenes of the movie that make me think so.