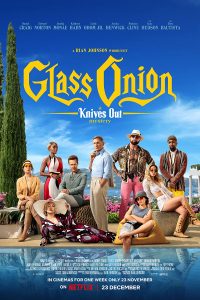 Knives Out was probably the last movie I saw with Mary in the theater before Covid happened.[1][2] This is apropos of nothing in particular, just a memory from the before times. For example, here in modernity, we did not see Glass Onion in the theater at all, though it got to Netflix with surprising rapidity[3].

So there’s this tech billionaire guy, who like all tech billionaire guys on film in the past five years is probably a riff on Elon Musk. And he invites all of his friends to his private Greek island for a murder mystery weekend by way of an incredibly fancy puzzlebox. (A literal puzzlebox.) Plus he also invites the world’s greatest detective, Benoit Blanc, which is to say Daniel Craig.

It’s hard to say more (even if it’s easy to intuit more) about the plot. What I can comfortably say is that it’s every bit as clever and as funny as its predecessor, and I would happily watch Craig and Rian Johnson make these movies until the end of time.

[1] Not the actual last movie I saw in the theater, that was The Invisible Man
[2] (Also, it wasn’t even that; we saw three other movies in between Knives Out and lockdown. Huh.)
[3] Joke’s on me: apparently it is a Netflix original that had a one week theatrical release. Huh.