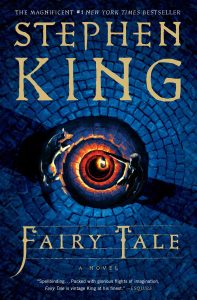 I know my reading slowed down when I had a kid. What I did not know is how dramatically my reading would slow down[1] with two kids. Nevertheless, it took me three months to read Fairy Tale, and yes, Stephen King books can be long, but they’re not “three months” long. And this wasn’t even one of the really really long ones from the ’80s.

King wrote a short story a few years back (or maybe a novella) about a kid and an old man and how the kid taught the old man how to use smartphones. Later it got spooky, but that was the core of it, the relationship between the child and the old man and the back and forth of what we have to teach each other. The first half of Fairy Tale feels like an expansion of that short story. And when you get right down to it, the second half also feels like an expansion of my somewhat dismissive “later it got spooky”.

The point is, the man has not missed a step in 50 years, as far as his ability to make you care about his characters and, more than that, the worlds he creates. I still itch to know what’s going down in Castle Rock these days. I wonder if Salem’s Lot ever got reinhabited. I notice quietly that it’s been 27 years since the last time people started dying in Derry. I wonder how Roland is doing. And that spark is here. I want to see what happens when Charlie Reade decides that maybe it’s time to buy himself a jackhammer.

[1] Or arguably, it slowed down because in addition to alternating with comics, I was reading another[2] book. I can see a case to be made for that as the cause.
[2] and lately, two other