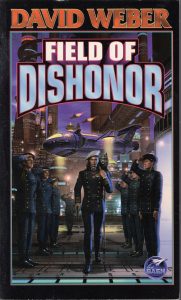 A thing worth noting is that I have only the barest memory of the plot of these Honor Harrington books. She’s supremely competent, and always correct in a ’90s hawkish conservative kind of way, and half the book is other people talking about how awesome she is. I read The Short Victorious War, let’s see, basically six years ago[1].

At that time, I correctly predicted that Field of Dishonor would immediately follow from a timeline perspective, while incorrectly predicting that I would therefore read it any time soon. The book is, as I also predicted, a complete deviation from the series so far, in that it’s 100% political (well, and personal), but 0% military, except insofar as it’s military politics. This is never quite offputting, but boy does it bring into sharp relief how much everyone (except the bad guy, obvs) in the book thinks Dame Honor is the absolute bee’s knees.

Despite the percent of the book dedicated to lavish praise of the main character (and despite the fact that Weber has decided that to be an effective conservative icon, one must be rich as well as titled, and therefore dumped nearly nine figures into her lap), there was ample intrigue and suspense to keep me entertained for the entire book, with one exception, which I am forced to drop below the cut due to spoilers for the finale and epilogue.

So, the last fifty or a hundred pages are building toward an inevitable climax, in which everyone (including her own common sense and the back cover blurb) is telling Honor that she must choose between justice and her career. Then, in the epilogue, having achieved her justice, the book quickly backtracks and says, “haha, no, you’ll just need to take a vacation until everything is screwed up, then, no worries, we’ll ask you to swoop in and save the day, same as always.” I do not resent that as an actual outcome in the next book, but to say it here at the end of this one felt like an entire bait and switch.

All the moreso because I kind of thought the part where Young violated the rules of honor[2] would be the escape hatch instead, and once even that was drowned in opposition politics, I really wanted to know what would happen in the next book. Now… it is not my intent to wait another six years to pick up the next one, but I’m also not in any real hurry.

[1] And the prior book another 6 years before that. Sheesh.
[2] as differentiated from Honor, to be clear