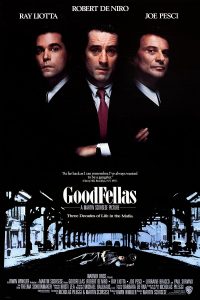 Last week on the letterboxd dot com weekly movie, the theme was Remembering Ray, as in Liotta, who died earlier this year. Since Goodfellas is a  film knowledge gap for both of us, it was a no-brainer for the week.

The movie is a mostly straightforward biography of Henry Hill[1], a mafia outsider (in that he was only half Sicilian, and therefore not eligible to be the real deal) who nevertheless lived a lavish, crime-filled life from his teens onward as (along with also not-Sicilian Robert DeNiro) a hanger-on to Paul Sorvino as a godfather type and Joe Pesci as an up and comer in the family.

Only, nobody uses the word godfather, or mafia, or even mob. “Family” comes up a fair bit, but not in the way that any of the characters are related or talked about being related, because it’s not that kind of family. All the same, comparisons to The Godfather are inevitable, because, well. What I will say is that this movie is almost certainly a better depiction of mob life in the ’60s and ’70s. I mean obviously, the guy who wrote the tell-all autobiography probably knows better than the guy who wrote a book that he basically made up from start to finish, but still, you can tell that a movie made up of a series of vignettes about life, love, laughter, and larceny is going to be more true than a movie with foreshadowing, visual themes, and a throughline about inevitability.

All of which to say, yeah, I think The Godfather tells a better story. But I’m glad I finally saw this one, because I should have had it in my repository long since. The only really sad thing is that I can’t hit up Jeff and talk about it now.

[1] In addition to Goodfellas being one of those movies that everyone has seen, Ray is also in the starring role, which made the choice even easier.