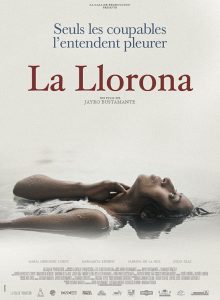 Earlier this week, I learned that letterboxd dot com[1] has a multi-year project where each week there’s a theme, and you watch a movie which a) fits the theme (okay, obviously) and b) that you’ve never seen before. Also earlier this week: the 8th year (season?) of this project of theirs started. After a brief discussion with Mary, we decided to go for it, and thusly, here we are.

Week one, Central American Independence Week, is to watch a previously unseen film from one of the following countries: Costa Rica, Nicaragua, Honduras, El Salvador, or Guatemala. La Llorona, then, is at first glance a slow moving court procedural in which an aging, arguably dying, Guatemalan general is on trial for genocide of the Mayan peoples in the early 1980s. That is, there is some time spent in court, but the majority of the first third of the film is the various members of his dead-eyed family wandering around their villa, berating the staff[2], resenting the protesters encamped outside their front door, and debating quietly among themselves whether the charges are true.

And that’s pretty much an entire movie in itself, of a certain character study ilk. Will the general’s wife learn about herself her complicity (or, if she already knows deep down, will she decide that it matters)? Will the general’s daughter make a choice to explicitly reject her parents for their unforgivable crimes (perhaps the least of which is, possibly, egregious interference in her personal life)? Will the general’s granddaughter become, by association, as dead-eyed as everyone else in the family or will she maintain her innocence? This could easily be the direction of the small slice of life that has been presented, unless, of course, you know what the llorona is.

Ultimately, the arrival of a single replacement maid to pick up the slack left to the housekeeper after the rest of the staff quit back in act one does not actually result in a different movie than the hypothetical one I described above. She just pushes the outcomes into a different groove than they otherwise would have proceeded along.

For the curious: I chose the French poster of this movie because the version I watched was distributed by a French, um, distributor.

[1] A movie-based social media network, apparently? Like here, if people actually showed up, and also had their own review sites.
[2] Who for some reason want to quit now that their boss is on trial for the genocide of, to a first approximation, their people.