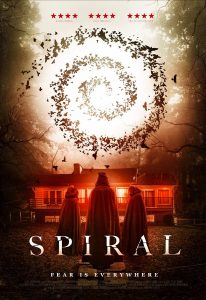 Did you ever wonder how it would look if someone took a run at Get Out, but for gay people instead of black people? If you have… Spiral doesn’t quite get there, but that’s not to say there isn’t a movie worth watching here so much as that it’s a really high target.

Two men and their 16 year old daughter move to either a picturesque bedroom community or else maybe just the suburbs? It kind of varies. Also, it’s 1995. Once there, they are exposed to glarey-eyed old men, homophobia, nosy neighbors, and for the younger and more flamboyant half of the couple, a creeping dread and flashbacks to a gay-bashing experience that his high school boyfriend took the brunt of half a lifetime earlier.

So why doesn’t it quite reach the comparison it was (apparently) striving for? For one thing, Spiral does not have the targeted feel that it should, on a moment by moment basis. I could change very little of the movie and it would fit a heterosexual couple just as easily. For another, the entire premise is cast into doubt by an unreliable main character who may simply be off his meds. And on the one hand, when done effectively (and this was), the game where they keep you guessing if this is an internal or external horror movie is something I’m quite fond of, even if the writers choose “internal” all too seldomly[1]. But on the other, when your base premise is this good, you commit to it instead of waffling between it and a diferent good premise, because half your audience won’t be satisfied regardless of what you pick.

Still and all, pretty good movie.

[1] Man I want to name drop an excellent example of when they did, but it kind of ruins the entire movie if you know in advance.