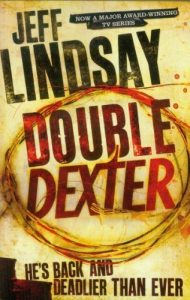 A couple of months ago, as you will no doubt recall, I read the wrong Dexter book. Since these are not 100% episodic, this presented a bit of a problem for me in terms of going back to right myself. Because, you know: yes I always know how the book is going to turn out at least mostly, but I don’t usually know how the incidental incremental advances in Dexter’s domestic and professional life will turn out? Except this time I did.

Anyway, Double Dexter chronicles the time Dexter got caught in the midst of pedophile clown slaughter, and then the witness got away, and then (let’s be honest, somewhat implausibly) got obsessed with the idea that maybe he, the witness, could start murdering bad guys, and then he sets his aim on the main bad guy he (still the witness) knows about, which is to say: our hero.

The main thing I got out of this book is that it’s probably good Lindsay decided to wrap up the series, because Dexter’s “look how smart I am” but clearly he isn’t so smart as all that schtick only works if the author, on some level, believes Dexter is in fact pretty smart, but just misses small tricks now and again. Whereas in this book, I felt like Lindsay was making fun of his creation, and, that is just not the series I want to read.

So, after whatever my next brief palate cleanser turns out to be: the finale! And I will have gotten another series off my to-read shelf, woo.

Ahem. This makes me sound like the series is a task, and therefore why am I even reading them? It’s not as bad as all that, even if this book was for certain the low point of the series. But the weight of that shelf (mostly metaphorically) has been holding me down for some time, and my greatly-reduced incidence of book-shopping over the last few years does make it feel like accomplishments are possible. So you see.