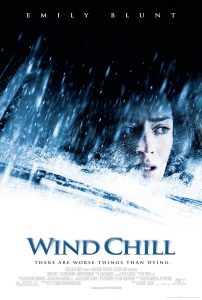 When I added Wind Chill to my watchlist on Starz, I think it was because I wanted to recapture the magic of Frozen, which I associated to in my head as having come out around the same time, even though it turns out the [non-Disney, stuck in a ski lift] movie came out a few years after this one[1].

The short version is, I did not. Alas!

Anyway, did you ever see The Sure Thing? John Cusack and Daphne Zuniga on a road trip during a college break: they don’t really know each other but they both need to get to the same place[2], and they quickly hate each other but are trapped together in this tiny hurtling box, right? You know how the movie goes, even if you don’t know specifically how the movie goes.

This movie is that movie, except it’s also a winter horror movie once they spin off the road into a ditch, can’t get the car started, it’s at night, and paranoia starts to set in. And if it had stayed that movie, man, I would be singing that movie’s praises to the rooftops. It quickly devolved into a different, boring movie, though, and long story short: meh. It’s like, I get that you can’t just sit in the car getting colder and more shrill in your accusations, that drama fizzles out fast. But if they had found a way to leave the car and keep the paranoia… and I can even think of some ways! Make it a satanic panic cultist movie, for example.

[1] And a few years before the Disney one, obviously
[2] I forget her reason. His is that he has a “sure thing” waiting for him. ie, someone who will definitely have sex with him, if that terminology has correctly fallen out of favor by the time you read this.