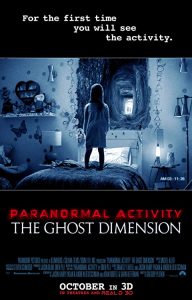 Anyway, there was one more Paranormal Activity movie that I missed, prior to the current new one that doesn’t yet count as missed. So now I’m caught up, yaaay.

The Ghost Dimension dares to ask the question: what if a paranormal activity movie, but it’s a new family who moved into the prequel house, and also they find a magic camcorder that can see what has until now been left unseen? You can often tell that by the sixth movie in a series, maybe the well is running dry?

I’m being unfair, though, this was a legit entry to the series, for the following reasons: 1) they came back around to a creepy kid. This is always the way to go, so that was a great start out the gate, and this little girl oozes creepy. Hopefully because she’s a good actor, as otherwise I feel bad for her now. 2) for the first time ever, there’s a good reason to hold onto the camera even when things are completely insane. Because you can see what’s going on and use it to save yourself in a way that people in the prior movies could not[1].

Okay, that’s not a lot of reasons, fine. But it represents a correct direction for the series and I’m not sad that I bothered with this like I might have otherwise been. Now, the problems with the movie: 1) the time travel stuff does not make a lick of sense. It didn’t when they introduced it, and it does even less now. As far as I can tell it’s there only so new characters can stumble into scenes from older movies. 2) watching movies with commercials sucks. …okay, that’s not a problem with the movie per se, but it is a problem with the distribution people not selling streaming rights to the right vendors. No, I will not pay a rental fee. Ugh, get off my lawn.