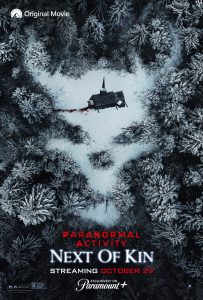 Next of Kin dares to ask two new questions, which makes it objectively twice as important as Ghost Activity[1] was. One: what if paranormal activity, except Amish? Amish are not as spooky as children, but there’s no denying that living an 18th century lifestyle in the 21st century is a little creepy if you adjust the angle on it even slightly. And this time I’m being 100% serious: two, what if paranormal activity but with all continuity jettisoned and the whole thing is itself, not beholden to anything except found footage of jump scares and eventual terror.

Young adult, adopted with no history beyond a lady dropping her off at a hospital, finds an Amish relative via 23 and Me or whatever, and her friend decides, hey, this would be a cool documentary. Let’s go find your roots! And they do, with a conveniently good excuse to always be filming things[2]. Later, they learn that Amish are in fact creepy, as is their church in the woods, as is their spoiler stuff I won’t mention, and all of this even if they are not actually Amish at all.

I think I like the ending of this movie best of all of them except the first one.

[1] That’s not actually the correct name, but I’m leaving it as is. haha oops
[2] By my count, maybe three of the movies actually have this excuse for the whole duration, which is not the worst record.