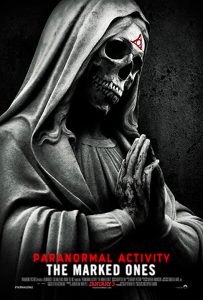 It’s been nearly a decade since I last watched a Paranormal Activity movie. …well, a new one, anyway. I rewatched the first four this week, after determining that they released entry #7 and thinking, should I catch up? Hey, why not!

To answer: The Marked Ones is a perfectly cromulent spooky demon stuff movie. Things move around of their own accord, something is angry about who knows what, there is a third act body count, all the boxes were ticked off, even ominous references to the Featherstons. But… it was either too much or not enough.

I guess what I mean is, the first movie was just a movie. The second movie and onward built on a shared mythology, though, following the backstory and travails on one cursed family. And, okay, the prior movie did make reference to an army of demon people looking for hosts for their pet demons or whatever is going on; it didn’t entirely make sense? And look, I found my point! Because the problem isn’t that this movie built on the demon army idea by branching out to different families experiencing different but basically the same problems. That part was great, and even a correct direction for the franchise.

No, the problem is that nothing new happened. Well, no, the first problem is that every character was a teen, and teens aren’t spooky. Kids are spooky, and we have been given too many spooky kids in this series to move to adult teens now. No thank you, I have Friday the 13th[1] for that. But the main problem is, I don’t know anything new about the mythology than I knew at the end of the fourth movie. Why is there an army? Are they all for one demon? Are this many people coming due for demonic money and power deals, or how did the army even happen? Answers to these questions: nope, nothing, nada. This was just… filler.

Meh. (I liked the Simon Says bits, though.)

[1] Or maybe A Nightmare on Elm Street is more appropriate?