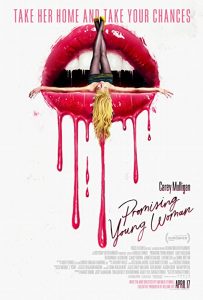 Every movie I watched in early 2020, according to a memory that is at worst only slightly flawed in this regard, had a preview for Promising Young Woman. April could not get here fast enough! …and then all the theaters plus pretty much everything else shut down in late March, and when the movie received theatrical release last December instead, I was still not in a place where going to see it there seemed like a reasonable option. Because, you know, vaccines didn’t exist yet.

And so I’m basically a year and a half overdue on this movie. On the bright side, it delivered!

The thing is, oh man, I don’t want to say anything other than go watch it, on the off chance that that barrage of previews didn’t spoil the basic premise. There’s a lot more to see, but those first moments were a killer even in the preview, much less what it might be as a full scene with no idea what to expect.

What I can say is that there’s a little bit of a mystery here. We are presented with the portrait of a woman who was promising, past tense most definitely intended. She was a med school student, but now a few years later she’s a barista who lives with her parents and gets pass out drunk in dive bars. But why? What happened? Can she break the cycle of her existence?

How far will she go to do so?

Separately from the fact that it’s good, it’s something basically everyone should see. I just wish I believed that it would be as meaningful to, y’know, everyone.