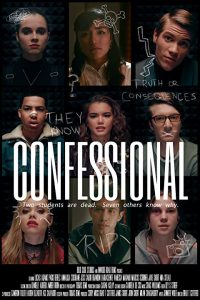 I hate it when research disproves a theory that superficially matches all available facts. See, the main thing that Confessional had going for it was its Covid-conscious style. Seven characters in a video confessional booth, telling (or refusing to tell) their stories and how those stories overlap with each other and with the two students who died on campus on the same night a few weeks ago. The upshot of this premise being, there was rarely more than one actor on screen at any given moment, and never more than two.

But then I find out it came out in April of 2019, and was therefore filmed earlier than that, and… ugh. I guess I could turn this around by saying it presaged film in the time of Covid, or that it was prescient, or some other Nostradamus-light analogy, but I’m just too disappointed to bother.

It was, y’know, fine. Which is to say, sadly, that it’s neither good enough nor bad enough to be noteworthy.